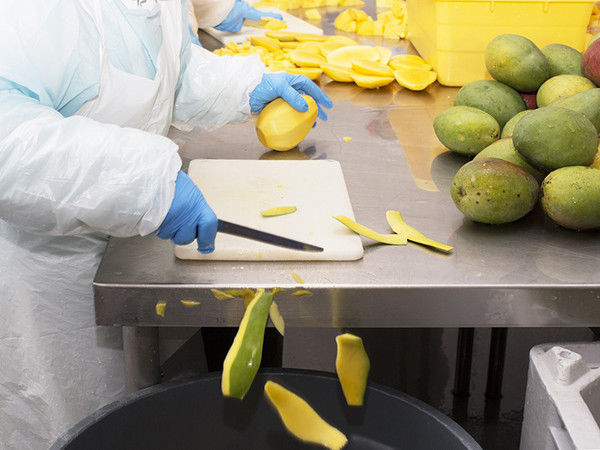 A worker at Baldor processes mangoes. Baldor saves all of its food scraps for human or animal consumption. (Courtesy of Baldor) 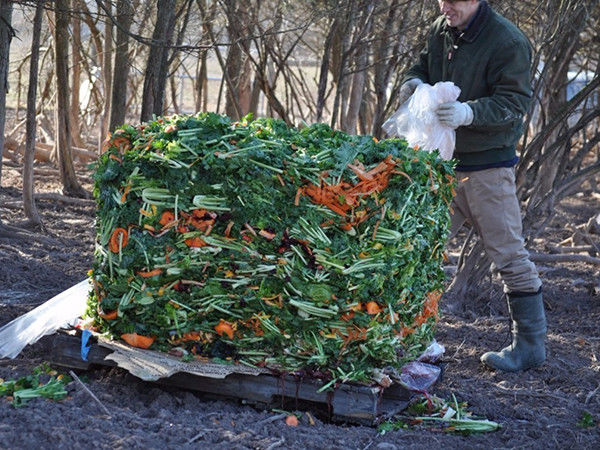 A collection of food scraps is prepared for pigs to eat. (Courtesy of Baldor)

A worker at Baldor processes mangoes. Baldor saves all of its food scraps for human or animal consumption. (Courtesy of Baldor)

A collection of food scraps is prepared for pigs to eat. (Courtesy of Baldor)

Those carrot tops you've lopped off are not garbage. Your snapped-off green-bean stems are not scraps. They are what Thomas McQuillan, sustainability director for Baldor, a specialty foods and produce distributor, calls sparcs - "scraps" spelled backward and pronounced like "sparks." And sparcs, despite popular assumption, are often just as edible as the rest of the fruit or vegetable.

"The narrative around food that we don't traditionally eat is all negative," said McQuillan, whether it is the recently in vogue "ugly" produce or the yuck-inducing name "trash cooking." "Instead of calling this trim or byproduct, let's come up with a name for it."

It worked for the slimehead, a fish we now see on restaurant menus as orange roughy. It worked for Archibald Alexander Leach - you probably knew him as Cary Grant. And McQuillan is hoping the rebranding effort will make a dent in this country's huge problem with food waste.

It's already working at Baldor. The company, which provides produce and specialty goods such as caviar and olive oil to the Mid-Atlantic and Northeast's food-service industry, no longer produces any organic food waste as of this year, thanks to some clever reuse initiatives. For the company's Fresh Cuts program, which offers pre-sliced, diced or otherwise prepared vegetables, Baldor saves all of its sparcs (though the company stylizes it with a capital C, "SparCs," to "help make the word stand out," McQuillan said) for human or animal consumption. Previously, these edible and nutritious pieces of fruits and vegetables would have been discarded.

Carrot skins and tops, strawberry tops, odd-shaped pieces of watermelon and other fruit and vegetable pieces are sold at 30 cents a pound - about half their usual value - to Misfit Juicery, a D.C. company that cold-presses perfectly-edible "ugly" produce into juice. Other vegetable odds and ends are sold to Haven's Kitchen, a New York restaurant and cooking school that uses them for sauces, soups and broths. Baldor is also experimenting with other creative reuses. McQuillan says the company is dehydrating sparcs and turning them into a dried vegetable blend that he compares to bouillon. Baldor plans to make it available for its clients and retailers by the end of 2017.

Other sparcs that are less useful to humans, such as cantaloupe rinds or mango pits, are sold in enormous bags at 5 to 12 cents per pound to Brick Farm Market in Hopewell, N.J., where they are fed to pigs or are composted. The bulk of Baldor's food waste - about 120,000 pounds a week - is trucked to a processing plant, where it is donated for use in chicken feed. The only sparcs that do not go into the chicken feed are any bits that have fallen to the floor or that were scraped off plates in the company's cafeteria. Those byproducts are processed on-site in a "waste to water" system.

The "landfill can no longer be an option for any food, for any reason," McQuillan said.

It's also better for Baldor's business.

"There is a substantial benefit to the bottom line in two ways: If you are able to sell the sparcs, now you have revenue generation. You're also saving whatever it would cost to eliminate it," he said.

Previously, the company would pay to have its discards hauled away and processed. Now, other companies are paying for those same discards, which are delivered as part of a Baldor truck driver's regular route. The only cost is for hauling discards to the chicken feed factory, but it's a third less than what the company would have paid its previous waste processor, and "we felt very good about the fact that it was being used in feed," McQuillan said.

So if it's good for the planet and good for the company, why isn't every produce processor doing this? It's partly because it can be hard to convince people that it is a good idea.

"When we first started talking about sparcs, operationally speaking, there was a resistance to change the way we processed this food," McQuillan said. "I think this would be the case in any food-processing facility. If you are processing a certain way, you have protocols in place to handle any aspect of production. Changing those protocols is challenging."

After all, it's easier to just send thousands of pounds of garbage away in a truck. It's harder to turn them into sparcs and find a second use for them. But McQuillan hopes that more food producers will find a way to use these remnants in their products, whether to feed the needy or just to sell to everyday consumers.

And even though corporate changes could have a huge effect, McQuillan hopes to see sparcs-based cooking at the consumer level, too. The easiest step is that time-old trick of throwing vegetable odds and ends into a plastic bag in the freezer and using them to make a big pot of broth at the end of the week. According to the Natural Resources Defense Council, we throw away 25 percent of the food we purchase. The average family of four spends an average $1,560 each year on food they never eat.

"I think that would be a wonderful day, if we thought about, in our own kitchen, how we could be more responsible," McQuillan said.