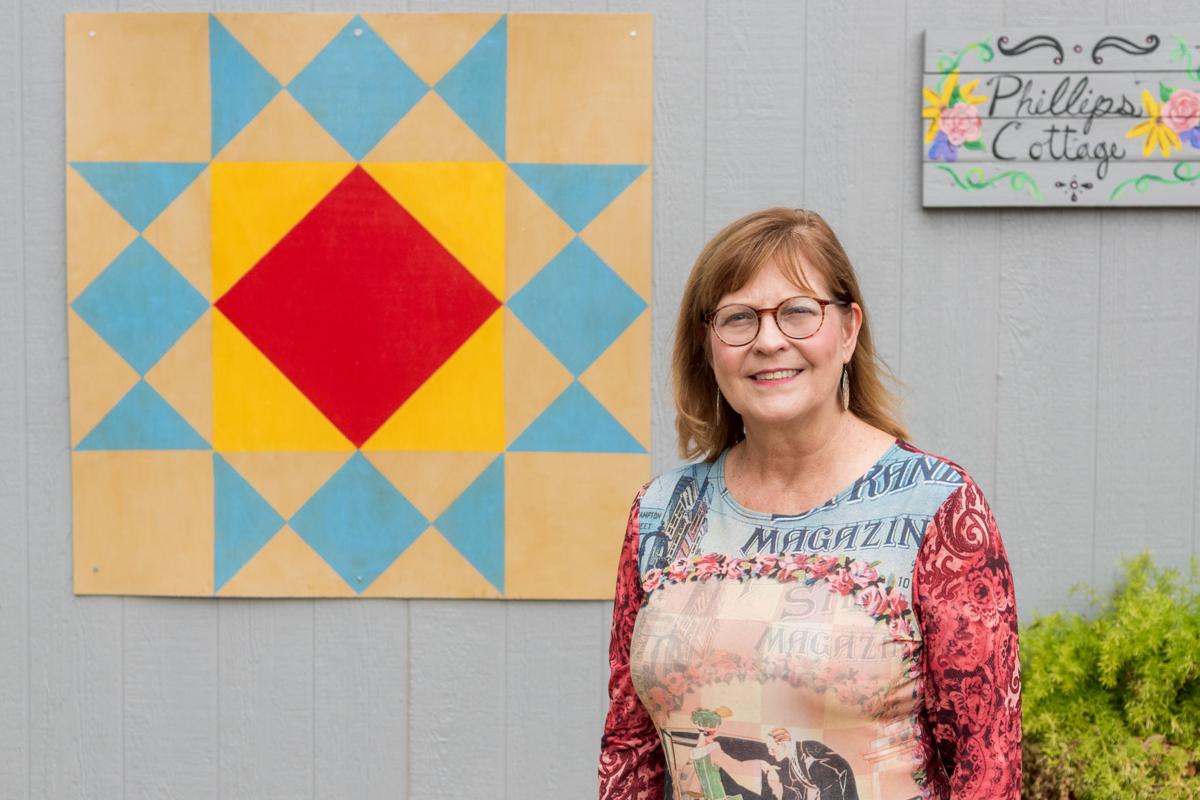 Rhonda Reuter shows the quilt block she made. She is coordinating an effort to create a quilt block trail in the Tyler area. 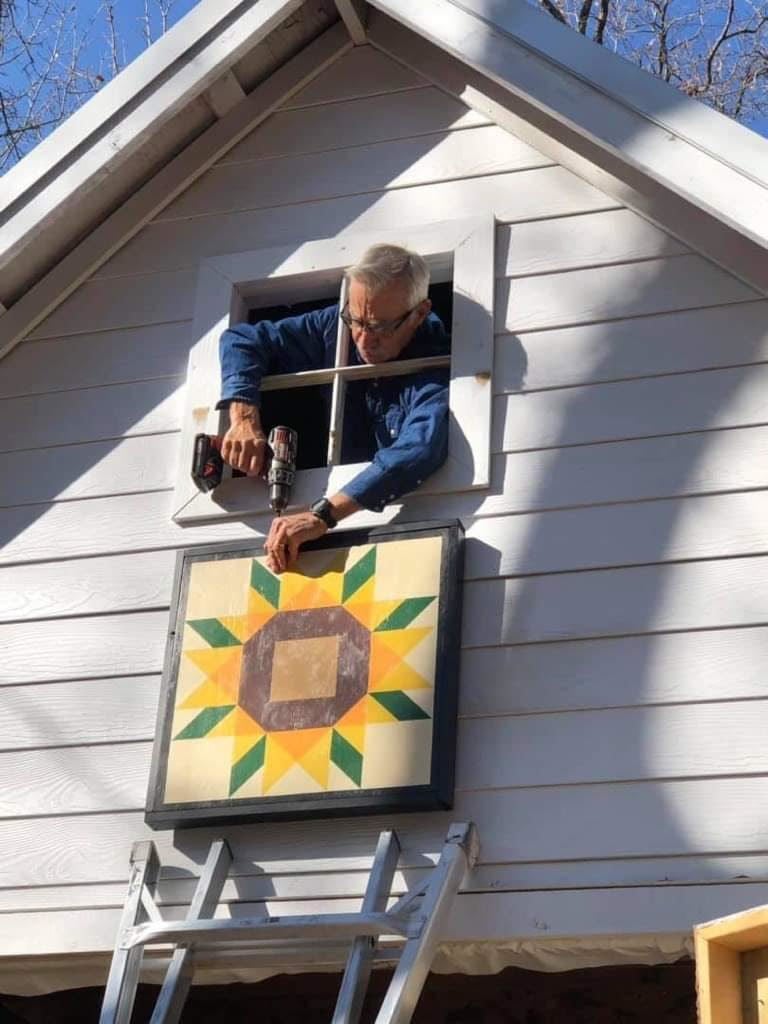 David Raine hangs a quilt block that is on view at the Wood County Arboretum in Quitman. 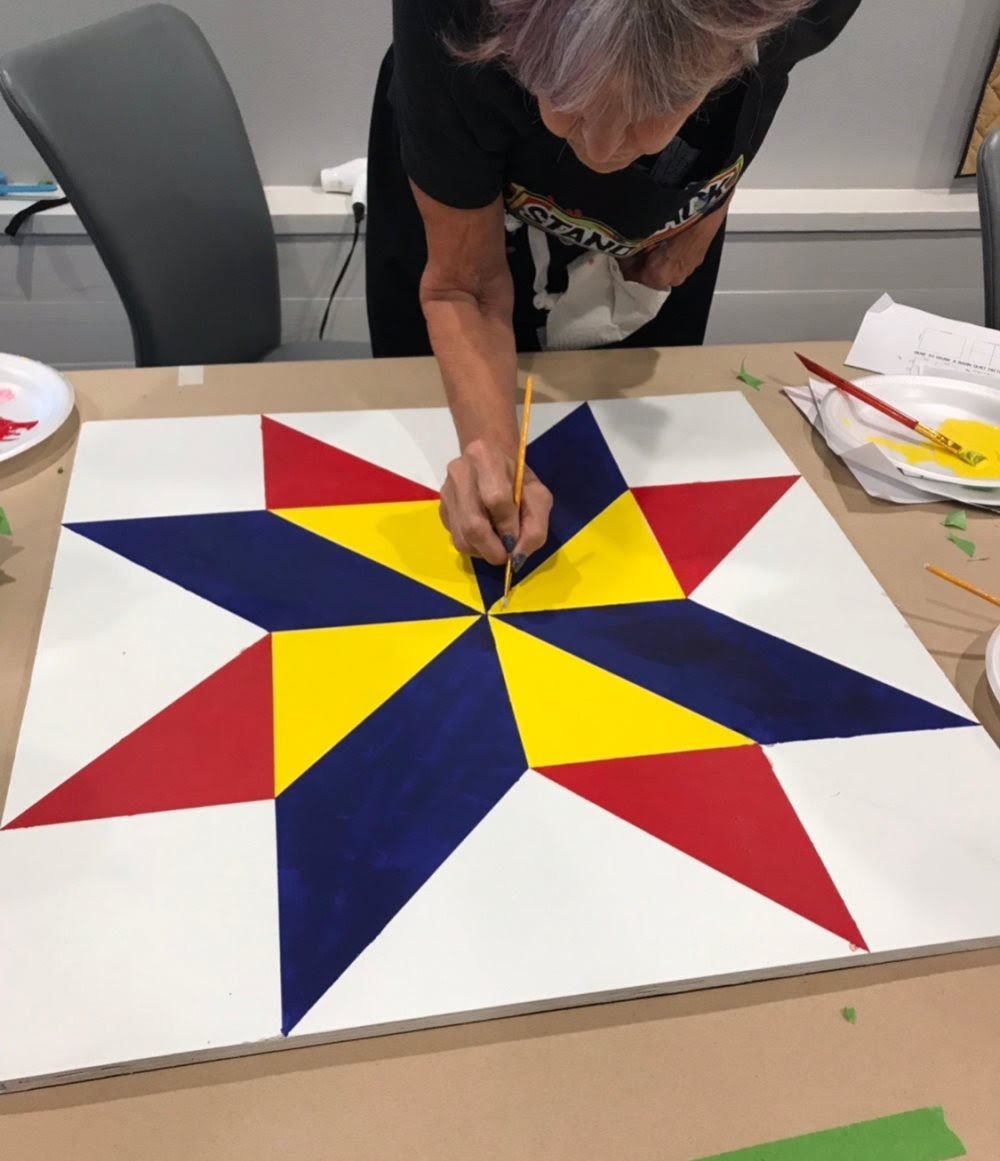 Pam Sides of Palestine makes a quilt block to display on a quilt block trail being created in East Texas. She made the block during a monthly workshop held in Tyler.

Rhonda Reuter shows the quilt block she made. She is coordinating an effort to create a quilt block trail in the Tyler area.

David Raine hangs a quilt block that is on view at the Wood County Arboretum in Quitman.

Pam Sides of Palestine makes a quilt block to display on a quilt block trail being created in East Texas. She made the block during a monthly workshop held in Tyler.

Rhonda Reuter of Tyler was in New Orleans with her sister last summer when something caught her eye.

"I saw this little sign and there were little cards that had a map and addresses about a quilt trail."

The Tylerite was intrigued and then became excited. The owner of Crafts & Quilting Etc. knew this was something she had to experience.

She and her sister got back in the car and began making their way along the Louisiana Quilt Trail, a collection of sites displaying wooden blocks painted in bright colors and in patterns of quilt squares.

One of the largest quilt block trails of its kind in the nation, it zigzags across Louisiana taking visitors along city streets and through countrysides dotted with yesteryear plantations and picturesque barns.

"Painted blocks were on houses, businesses, sheds, everywhere," Reuter recalls. "Quilts even hung in the windows."

The Louisiana Quilt Trail is one of thousands of such trails, some big and some small, across the United States. Some of the larger barn quilt trails (so called because the blocks often are displayed on barns) have hundreds of sites and attract tens of thousands of visitors each year.

Reuter began wondering why couldn't the Tyler area have its own driving trail? Many of her friends and customers are enthusiastic quilters who she believed would be more than happy to make and paint a block to show.

With and abundance of enthusiasm and determination, she set out to organize the East Texas Barn Quilt Trail.

"Have you heard about the American barn quilt trail movement? Have you driven a barn quilt trail," she wrote in reaching out to prospective participants. "They are all across Texas and America. Like colossal roadside canvases, barn quilts artistically combine two symbols of Texas heritage — barns and quilts. The colorful patterns, painted on or hung on hundreds of barns, houses, businesses or even sheds throughout the region, create the backdrop for a series of driving and walking tours perfect for an afternoon escape.

"Do you want to be a part of an East Texas driving tour that will connect art with the city, a scenic country drive or small-town visit?"

For Pam Sides of Tennessee Colony, the answer was a resounding yes.

It is a Saturday afternoon and Sides is one of a half dozen women around a long table in a garage converted into a crafts workshop behind Reuter's store.

Sides and the other women are taking part in one of the monthly workshops where people come to paint wooden blocks to resemble quilt squares.

"Chose the colors you want," Dana Schaff, the owner of the Crafty Fox, tells the women who are ready to paint their 2-foot by 2-foot squares that have been sanded and primed.

Each woman has drawn on their square different patterns. Some of the patterns form artistic versions of stars and diamonds. The trick in pulling off a good block is the design and color choices, Schaff says. A square that she made in an unmistakable patriotic theme hangs on the wall of the workshop.

Participants in the three-hour workshop are guided through the process of making a painted block from scratch. Information about the workshops is available at the craftyfoxoftyler.com. At the end of the day, participants have a block to take home.

Sides is a repeat participant. On this day, she is making her fourth block.

As a quilter, Sides says designing a wooden block in an intricate pattern is an extension of something that gives her joy.

"Instead of sewing a block, you're painting it," she says.

She says she has perfect places to display her painted blocks and will absolutely lend her work to the trail.

Many trace the beginning of the barn quilt trail movement to Donna Sue Groves of Adams County, Ohio. In 2001, she painted a large quilt square on the side of a barn on her property to pay homage to her mother and the Appalachian tradition of quilting.

She partnered with others to create and show blocks at nearby locations. Some displayed their blocks on barns and others hung them on their homes. She began to promote the collection of sites as a trail and encouraged others to drive through the countryside and see the beautiful blocks on view.

"The project was a homey, heartwarming success, and Donna Sue was asked by other quilt enthusiasts, artists, and historians to help develop quilt trails in their states as well," says quilt pattern designer Suzie Williams, on her quilting website.

"Tennessee, Iowa and Kentucky were the first to jump on board, all eager to take pride in their networks of old barns, and their rich cultural histories," notes Williams. "Now, you can run into quilt trails in rural areas all around the country, each with their own unique symbols and stories."

The trails connect people to the past.

"Barns and quilts are part of our East Texas traditions," Reuter says. "There are so many traditional quilt patterns to choose from and the barn quilt trail gives people the ability to take a pattern and make it unique, make it their pattern."

Also in East Texas is the The Pineywoods Barn Quilt Trail, with dozens of sites in around the Nacogdoches area.

The trail was organized by the Nacogdoches Quilters Guild and is being promoted by the county's chamber of commerce and Visit Nacogdoches as "our own region's piece of barn quilt Americana." The trail is described as a work in progress.

Although the East Texas Barn Quilt Trail is still in its earliest stage, some people have already made and put up blocks. Some are located in Tyler's red brick street and Azalea District areas.

Reuter's contributions are a block in a pattern called Girl's Favorite (because it resembles a diamond) on view at 303 W. Phillips, and pattern called Patriotic Stars on display in front of her husband's medical office at 712 S. Bois d'Arc Ave.

Located at the entrance of Dory's Gardens, 600 W. Rusk St., is a block with a pattern called Doorway to Inspiration. A barn at Wood County Arboretum in Quitman displays the pattern Sun Flowers.

Participates pay $10 that Reuter says will be used to help promote the trail and create maps. She says the goal is to have these maps in area chamber of commerce offices, like it is done in Nacogdoches County.

Reuter believes the East Texas Barn Quilt Trail will one day provide residents and visitors alike a new reason to "explore the city and countryside and enjoy the colorful and rich history of quilts."

"We have had lots of interest and most of the (block making) workshops have been full. People that don't quilt are looking forward to driving the trail," Reuter says. "I think at this point we just need to get the word out so more people will participate. ... I think this trail could really grow."

People who are interested learning more about trail locations or to participate can go to craftsandquiltsetc.com.