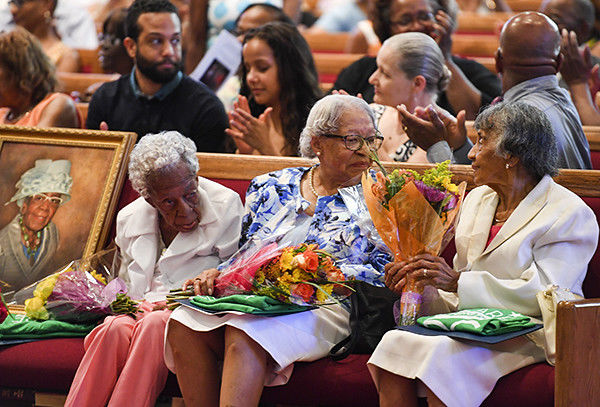 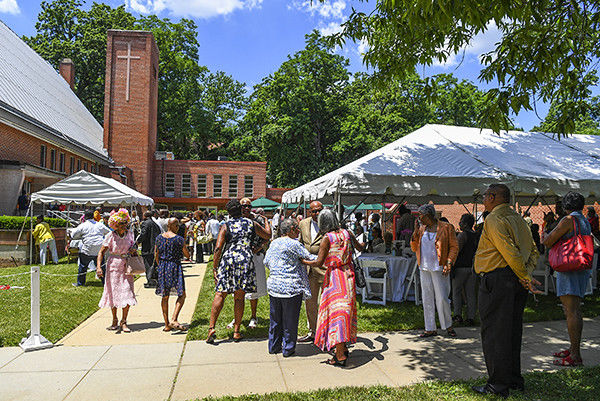 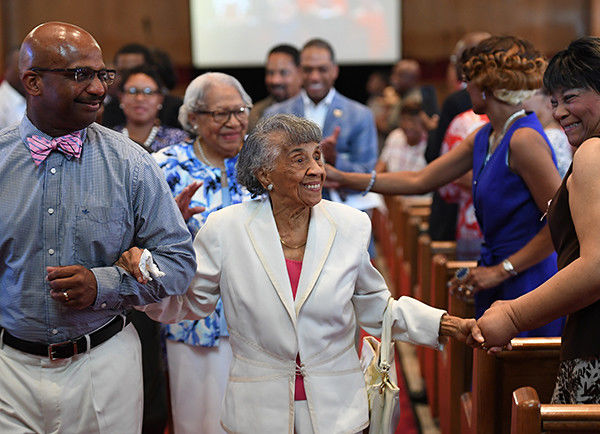 Centenarian Bernice Grimes Underwood is escorted by her grandson, Tony Grimes, during her 100th birthday celebration at the Zion Baptist Church on Saturday in Washington, D.C. (Photo by Jonathan Newton, The Washington Post)

Centenarian Bernice Grimes Underwood is escorted by her grandson, Tony Grimes, during her 100th birthday celebration at the Zion Baptist Church on Saturday in Washington, D.C. (Photo by Jonathan Newton, The Washington Post)

On Saturday, three Washington, D.C., women, best friends for nearly a century, celebrated reaching triple digits during a ceremony at Zion Baptist Church in northwest Washington - the church they have all regularly attended since childhood. They were all born in June or July of 1916.

They had hoped a fourth close friend, Leona Barnes, would be able to take part in the festivities, but she died in May, two months shy of her 100th birthday. The ceremony also paid tribute to Barnes, and a large portrait of her sat on the church bench beside her friends throughout the 90-minute service.

"This was so exciting and joyful," Bernice Grimes Underwood said of her birthday celebration, which a couple hundred people attended.

"I never thought I would get to this age," said Gladys Ware Butler, the centenarian nicknamed "the quiet friend."

Barnes, Butler, Underwood and Ruth Hammett met as children growing up in Southwest Washington, where Zion Baptist Church was originally located. They played jacks and hopscotch and jumped rope together. Three of them had babies in the same year, 1933.

They built careers for themselves and remained close friends through adulthood. They remember the race riots that ripped through the city in 1968, and they recall hearing the words of the Rev. Martin Luther King Jr. They mourned together when they each buried their husbands and elderly children.

Hammett's youngest son, Vernon, 60, said the friendships have been extraordinarily important to his mother. Vernon pushed Hammett in a wheelchair during the ceremony.

"My mother said that all of their children are her children," he said.

When they were born in 1916, women did not yet have the right to vote. They never thought they'd see the day when a woman or black person could or would become president. They all plan to vote for Hillary Clinton in November, and they all voted for Barack Obama.

At Saturday's celebration, church leaders and community members said prayers, sang songs, and showered the women with flowers and gifts. They wore fitted blazers, and their sons and grandsons walked them the down the aisle, where they greeted their friends and family.

A half-hour video aired during the ceremony in which each of the women - including Barnes - talked about their lives, friendships, regrets and offered wisdom to the younger generations.

"Do unto others as you would have them do unto you," Underwood said.

While the video played on a screen on the church dais, Underwood and Butler - who both still live on their own - would whisper to each other and laugh. When the video showed Underwood dancing, she laughed so hard that her whole body tilted until her head was leaning on Butler's shoulder.

"I still dance," Underwood, who is nicknamed the "woman of grace and charm," said later in an interview. "Sometimes by myself."

The women all attributed their longevity to prayer and the "grace of God."

In the video, Butler and Barnes both said their biggest regret in life was not furthering their educations. Butler wished she could have finished high school, and Barnes college.

"I would love to go back to college," Barnes said in the video. "I've always wanted to go to college."

The friends still speak to one another on the phone almost daily, and they see one another when they attend church on Sundays.

"All of my life I've known Ms. Barnes," Underwood said. "We talked to each other every day. I miss her dearly."

After the ceremony, the three women joined guests for a lunch outside. They sat side by side on a table under an awning as their family members and friends formed a line to personally wish them happy birthdays. A huge cake with their four faces on it was placed beside them.

"I've enjoyed every minute of the celebration," Underwood said.

A congregant who does make-up for Oprah Winfrey arranged for the celebrity to send a video to the women. Winfrey said in the video that she had never seen anything like this - a group of best childhood friends celebrating their 100th birthdays together.

"The things you must have seen over the last century," Winfrey said. "I don't know what to say," she continued as she wished the women "the grandest and greatest" birthday.