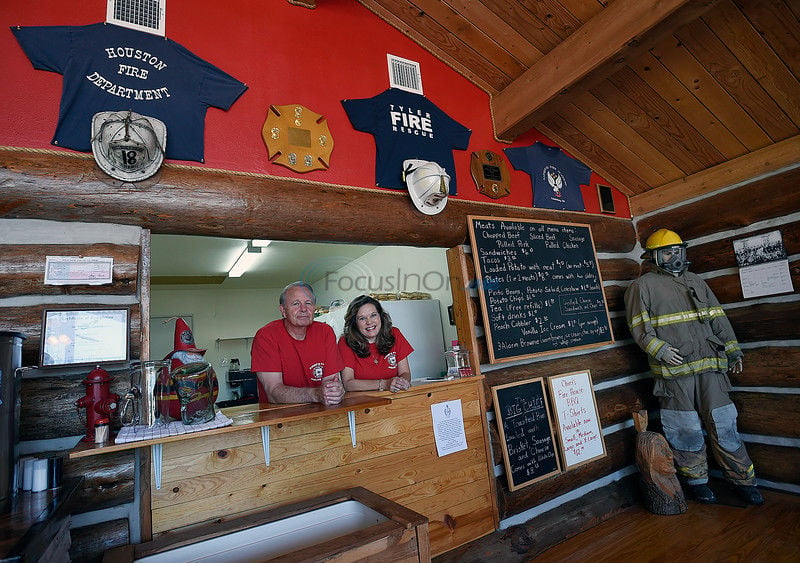 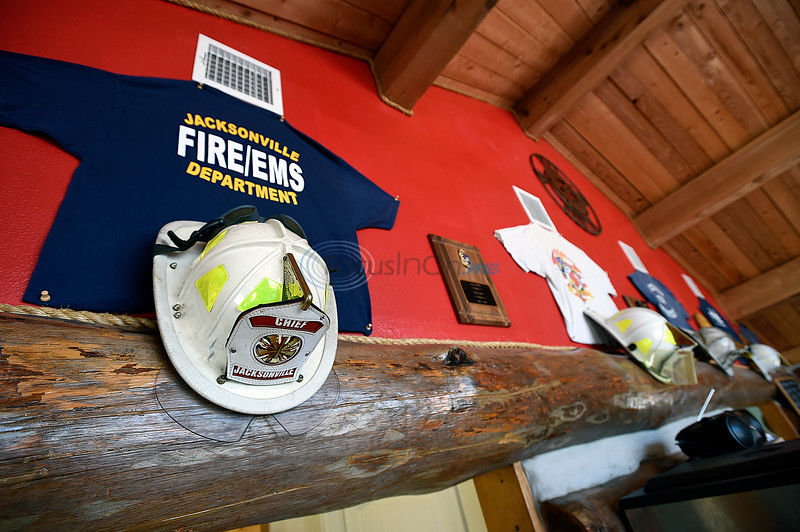 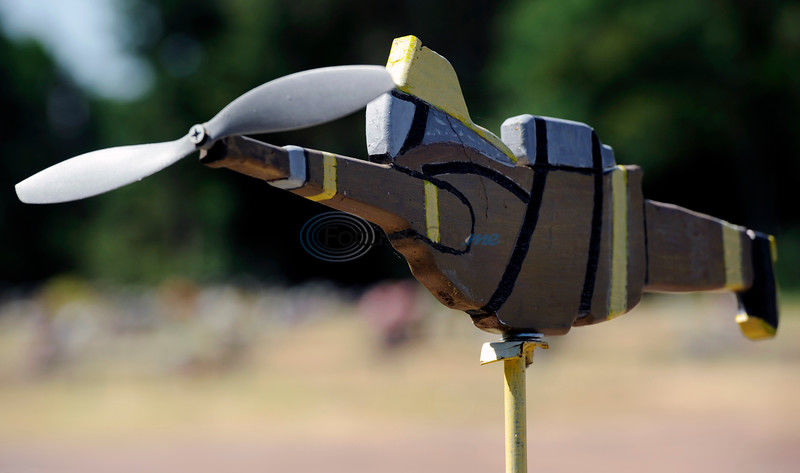 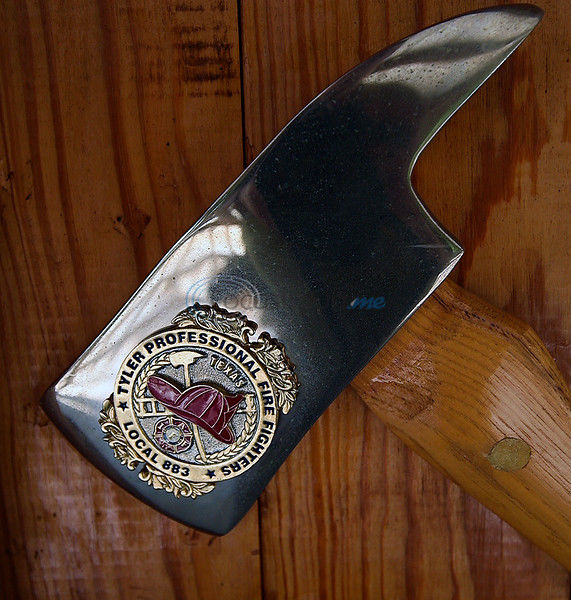 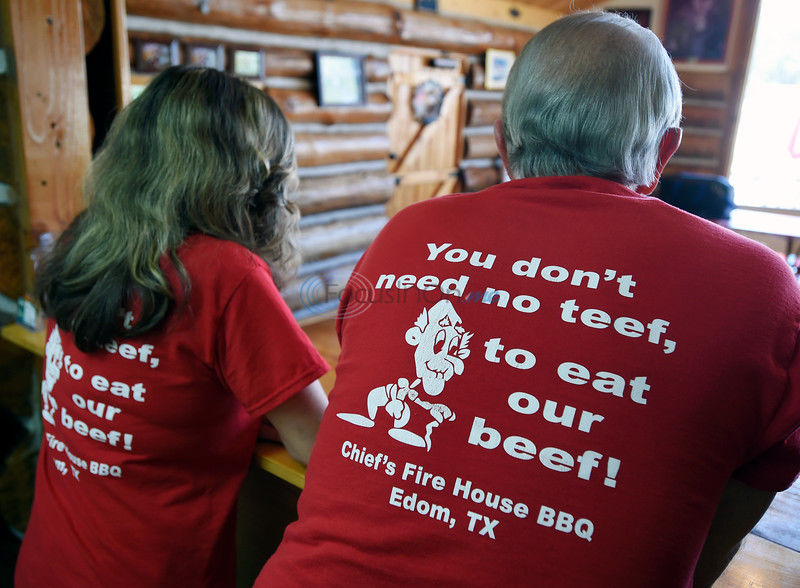 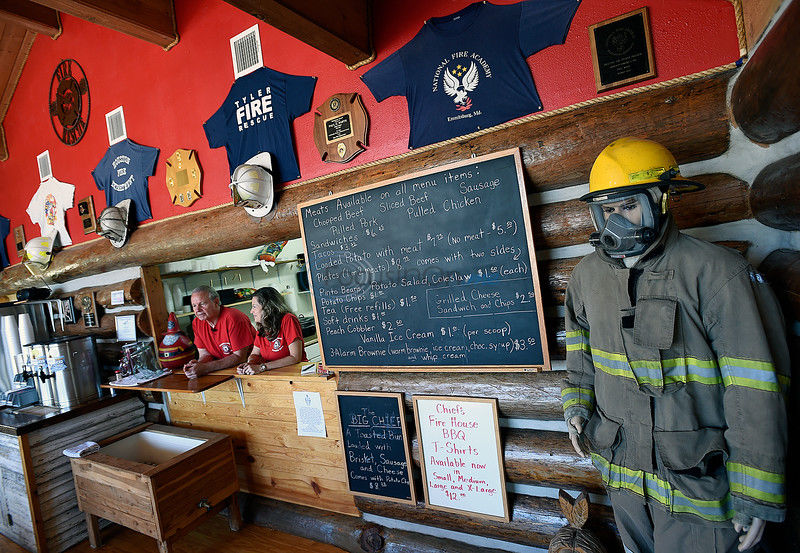 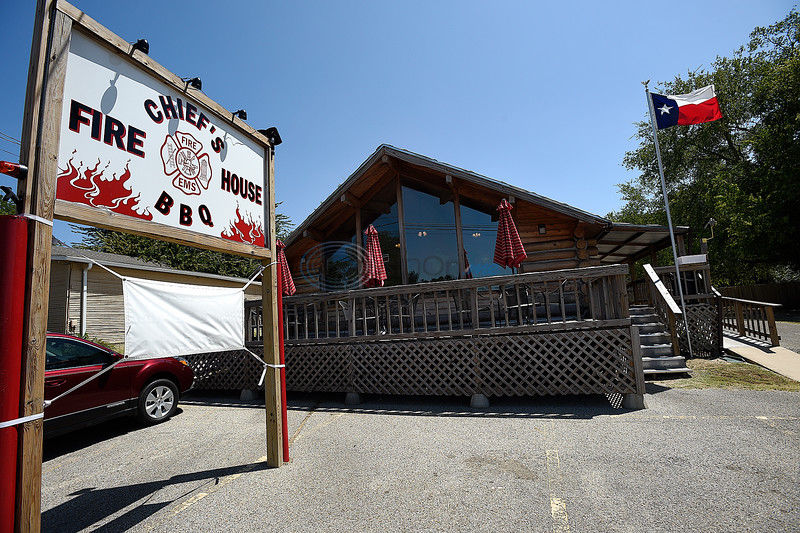 EDOM -Retired fire chief Paul White shelved his helmet and insulated boots several months ago to begin a new chapter in life, but he can't seem to give up the smell of burning wood.

The longtime fire official, with more than four decades of service to his credit, is the inspiration and muscle behind Chief's Fire House BBQ in Edom, which opened a few months ago on the town's main drag, in a built-from-scratch building made of logs.

"We're only open two days a week," White said. "This is our retirement job … basically we don't have a boss."

The amended schedule allows the couple to work a few days a week, reserving the time in between for fun, travel and relaxation.

Chief's is usually open 11 a.m. to 8 p.m. Fridays and Saturdays, unless a note on the door says otherwise.

White built the restaurant over the course of three years, teetering on ladders and manhandling dried pines to bring the project to fruition, along with a little help from some firefighter friends.

His business partner is his wife, Myra, a retired language arts teacher who seems right at home with barbecue sauce and the ever-present smell of smoke.

They do it all at their restaurant: cooking, selling and cleaning up afterward.

"We enjoy doing it," Mrs. White said, recalling the zany challenge of serving hundreds of hungry customers who showed up for one of Edom's popular art events. "We have a lot of fun."

The restaurant ran short on supplies that weekend, but Mrs. White said important lessons about doing business in a tourist town were learned as a result.

During an average week, the couple divides up the work.

He handles and smokes the meat - such as brisket, sausage and chicken - using a combination of electric smoker and aromatic woods.

Mrs. White handles all the desserts … from the three-alarm brownie to the restaurant's delectable peach cobbler, a taste bud favorite.

The couple sells food cooked from kitchen-tested recipes vetted through family and friends: coleslaw, beans and a ketchup-based firefighter-approved sauce.

"If you like a sweet sauce, you'll love it," White said. "I like it better than any I've had."

He doesn't take credit for the sauce recipe, only the ability to follow the directions to reproduce it.

People are always bugging him to bottle and sell the ketchup-based concoction, but so far, the sauce is reserved for customers, some of whom buy it by the cup, he said.

The restaurant also offers stuffed baked potatoes, beef tacos and a something called "The Big Chief," essentially a brisket and sausage sandwich with cheese.

Texas is full of barbeque joints, but not all of them can boast about the tenderness.

White isn't into bragging, but he does promise the meat is tender and tasty, never dry or rubbery.

"It just falls apart," White said with a grin. "I never really cooked brisket at the fire department."

A firefighter buddy taught him the best way to prepare meat, so White took notes and perfected his own technique.

Everything offered at Chief's is cooked right before the doors open, so customers can get it and go.

"We don't have ribs," Mrs. White said. "We're trying to keep it simple. Ribs take a lot of time, and they take up a lot of space."

White has a reputation for planning his retirement and then changing his mind, sort of like Brett Favre with bunker gear, but he seems content with this latest endeavor.

He worked 22 years with the Houston Fire Department before agreeing to serve a little longer as chief in San Angelo.

Just when he began toying with the idea of retirement, a chief's job opened up in Tyler. He stayed in Tyler 10 years and moved on to serve as chief in Irving.

White finally retired last year as chief of the Jacksonville Fire Department, and so far, he seems content with the change.

Firefighter gear and mementos from his decades of service adorn the restaurant, and well-wishers are always passing on artifacts to add to his collection.

Yes, there are offers to strap back on his chief's hat and people are always inquiring about his log buildings, but White said it's time to work less and enjoy more.

Mrs. White just hopes he stays off the ladder.

"He's good with building, but I don't want him using a chain saw anymore," she said jokingly.

“The Lord is not slow in keeping his promise, as some understand slowness. Instead he is patient with you, not wanting anyone to perish, but everyone to come to repentance.” (2 Peter 3:9)