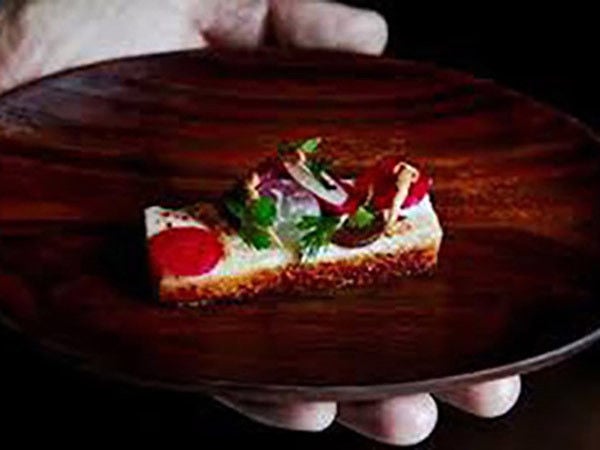 Pork belly from the tasting menu at Tru in Chicago. (Bloomberg photo by Lydia Mulvany) 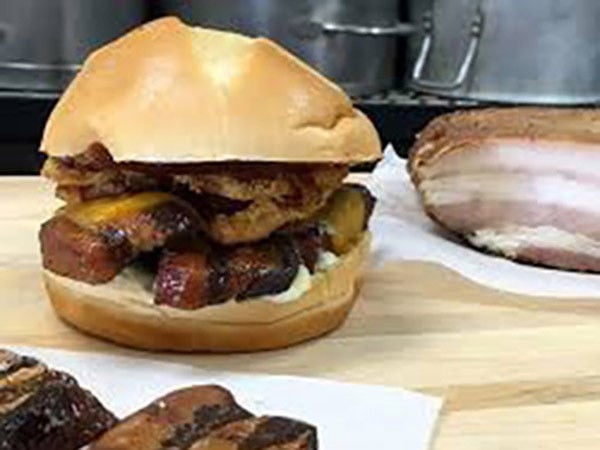 Pork belly from the tasting menu at Tru in Chicago. (Bloomberg photo by Lydia Mulvany)

Pork belly is offered at Tru in Chicago, presented on a wooden plate with pickled kohlrabi, enoki mushrooms, microparsley and a touch of espelette pepper from Spain. The dish is part of an eight-course, $158 tasting menu.

About a mile south, pork belly is also on the menu at the local Arby's, hickory-smoked and topped with cheddar cheese, barbecue sauce and fried onions in a star-cut bun. It's wrapped in paper, which comes in handy when the first bite sends pork fat running free, threatening clothing and steering wheels. The price is $5.49.

Bacon may continue to reign as the pig-part prince, but the belly is booming in cuisine both haute and bloat. Those concerned about inequality between the wealthy and the rest of America can find consolation in this humble hunk of fatty heaven, which more than doubled its presence on U.S. menus since 2012. What started with the experiments of adventurous chefs in restaurants decorated with the works of Andy Warhol and Gerhard Richter has trickled down to fast-food foodies selling pork belly in tacos, Southeast Asian banh mi sandwiches and Chinese bao out of to-go shops, trucks and drive-thru windows.

"We call it the bigger, badder bacon,'' Taylor said. "This could be the next chapter in America's love affair with bacon.''

Where there's revolution there's usually a market movement behind it, and this one is no different. The price of pork bellies plunged to a seven-year seasonal low this fall -- according to the Department of Agriculture, wholesale bellies are now about $1.10 a pound ($2.43 per kilogram), down from a record $2.0353 in 2014 -- as U.S. farmers produced 3 percent more than a year ago. Bacon costs about half that, yet dishes featuring belly usually fetch more. The average dish in a U.S. restaurant featuring pork belly cost $14.17 in the second quarter, compared with $9.56 for bacon, according to Chicago research firm Technomic. That means restaurants are making a killing.

Every hog has two belly sections that weigh around 18 pounds each, skin on. Fresh pork belly has thick layers of fat between meaty parts, and can be sold as is, or cured and sliced thin to make bacon. In 2017, Americans are projected to eat the most pork since 2004, according to the USDA.

"Everyone loves bacon, but pork belly can be infused flavor-wise and transcends ethnic borders,'' Dritsas said in an e-mail. "It is versatile and luscious.''

At Tru, known for its wide array of caviar, the dish is made from the belly of a pure-bred duroc, a special breed, raised without hormones, that the restaurant buys from a farm in Oregon. It's brined for 24 hours, then cooked sous vide for another 24 hours, a technique that removes the softest layers of fat. (Arby's also cooks its pork belly sous vide, which typically involves sealing the meat in a plastic bag in a hot-water or steam bath.) Before serving, it's seared on one side to create a crispy texture. A pork jus made from pork bones and clarified belly fat from the sous vide process glazes the dish. It has the bright flavors of summer and a heartiness that befits fall.

Tru executive chef Anthony Martin said fine-dining chefs are looking to traditional cuisines around the world, and part of these cooking traditions include getting whole animals and knowing how to use every part, something Martin learned while working under a German chef. The belly, Martin said, is a part that lends itself to braising.

Pork bellies are traditional in northern Europe and in Asian cuisines. In China, hongshao rou, or red-braised pork belly, is a classic dish, while Filipinos have belly chon, a rolled, trussed, roasted belly with the flavors of lechon, the roasted whole pig of Latin American countries. Italians use it to make pancetta. And in France, slow-cooked cubes of belly called pork rillons are a snack.

"Chefs that work for major restaurant chains and manufacturers, they're out eating and trying to find out what's next, and they found pork belly," said Stephen Gerike, director of food-service marketing and innovation at the National Pork Board. "Pork belly is hyperindulgent. If you want to drive traffic and get attention, pork belly is going to increase same-store sales, because people will want to come and try it."

There are incentives to keep bellies on menus. This winter, U.S. processing facilities may not be able to keep up with all the hogs, said Steve Meyer, an analyst at EMI Express Markets, meaning pork prices will likely continue their decline.

Arby's Smokehouse Pork Belly Sandwich is already selling well at the 3,200-store chain in the U.S., according to Taylor.

It's a fad, of course, that won't make American doctors happy.

The sandwich, as Arby's prepares it, packs 860 calories and a whole day's worth of salt. And if that's not enough, Arby's has another sandwich on the menu with the same ingredients -- plus smoked brisket and turkey. It's called Smoked Mountain.