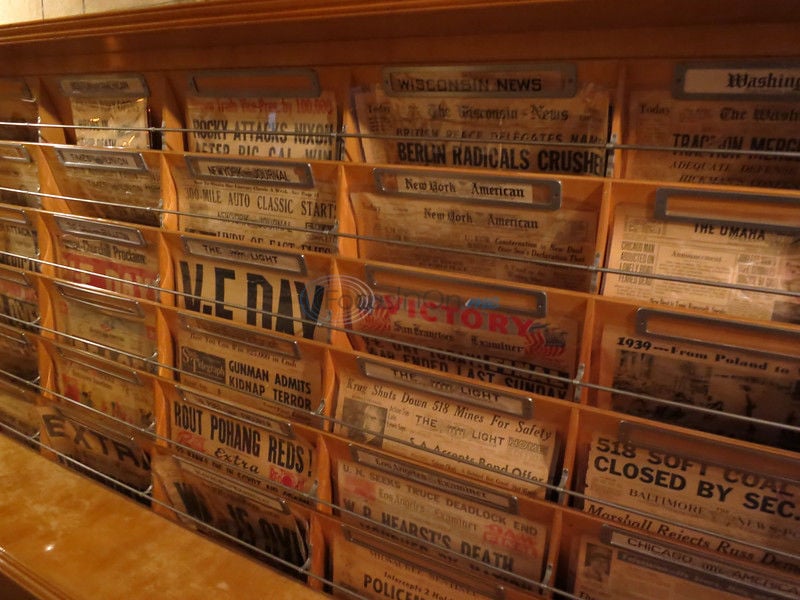 This photo shows old newspapers outside of the office at The Hearst Castle, the 165-room estate of newspaper publisher William Randolph Hearst, in San Simeon, Calif. (AP Photo/Jim MacMillan) 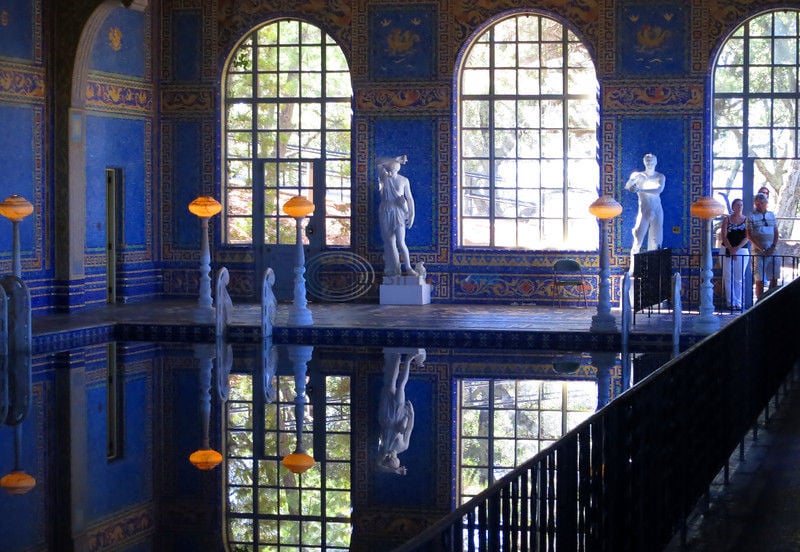 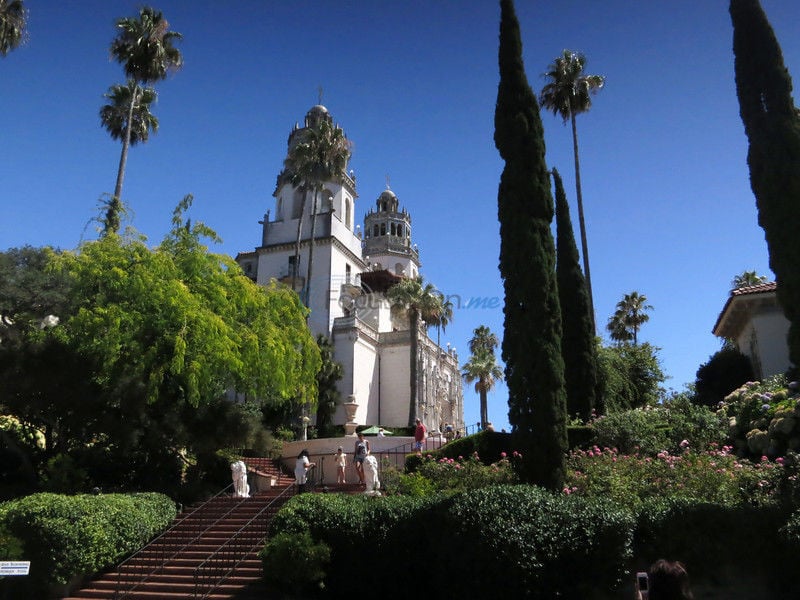 This photo shows the exterior of Hearst Castle, the 165-room estate of newspaper publisher William Randolph Hearst, in San Simeon, Calif. Visitors can tour the estate which he called "La Cuesta Encantada" ("The Enchanted Hill"), that overlooks the Pacific Ocean. (AP Photo/Jim MacMillan) 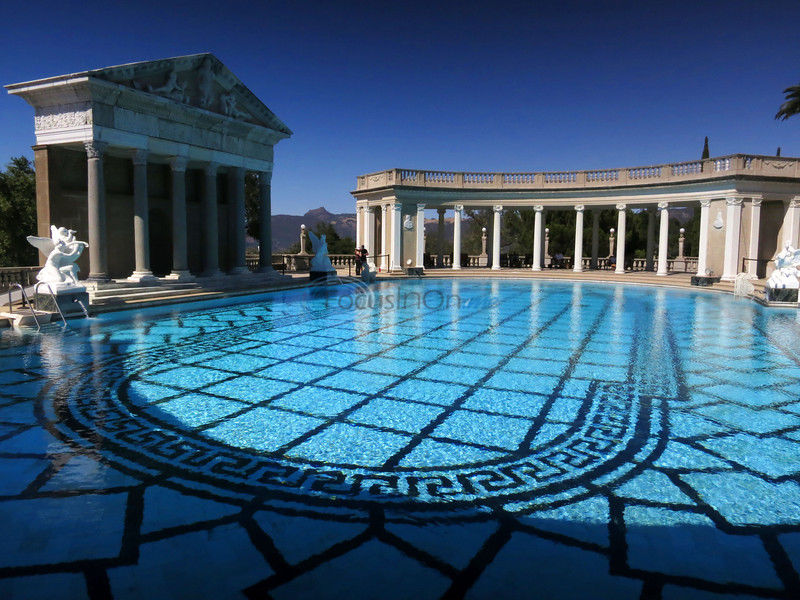 This photo shows old newspapers outside of the office at The Hearst Castle, the 165-room estate of newspaper publisher William Randolph Hearst, in San Simeon, Calif. (AP Photo/Jim MacMillan)

This photo shows the exterior of Hearst Castle, the 165-room estate of newspaper publisher William Randolph Hearst, in San Simeon, Calif. Visitors can tour the estate which he called "La Cuesta Encantada" ("The Enchanted Hill"), that overlooks the Pacific Ocean. (AP Photo/Jim MacMillan)

SAN SIMEON, Calif. — The coastline that parallels Route 1 in central California is so breathtaking that you might be forgiven for missing the zebras on the opposite side of the road.

And that huge chateau perched far off on the hillside? Almost unnoticeable at highway speeds.

Both belong to the legacy of larger-than-life newspaper publisher William Randolph Hearst, who chose this surprisingly unobtrusive spot along the Pacific Coast Highway to build his 165-room estate.

Now overseen by the state park system, the site known as the Hearst Castle is worth a side trip if you're driving between San Francisco and Los Angeles. An array of tours offers a glimpse into the lifestyle of the rich and famous that, while not quick or cheap, is not something you'll soon forget.

The Mediterranean Revival-style property designed by architect Julia Morgan occupies land in San Simeon that had been in Hearst's family for decades. The original acreage had few amenities, though, and the publisher reportedly told Morgan in 1919: "We are tired of camping out in the open at the ranch in San Simeon and I would like to build a little something."

That "little something" was under construction for the next 28 years, finally completed in 1947. The estate includes indoor and outdoor pools, lush landscaping and a soaring 115-room main house surrounded by three smaller guest homes. Hearst called his palatial manor La Cuesta Encantada (The Enchanted Hill).

It also once boasted the world's largest private zoo, holding exotic animals from polar bears to — you guessed it — zebras. The striped creatures roaming the family's ranch along the coastal highway are descendants of the originals, though the zoo itself no longer exists.

Most tours focus on the central building known as Casa Grande ("Big House") that looks more like a church because of its twin bell towers. Flanked by towering palms, it's filled with priceless art and artifacts, from centuries-old marble statues and exotic rugs to Tiffany lamps and antique ceilings.

The Grand Rooms tour shows off the main common areas. In the huge assembly room, guests socialized beneath high walls covered by valuable tapestries and oil paintings; in the flag-draped dining room, they ate on fine dishes and silverware but seasoned their food with off-the-shelf ketchup and mustard bottles (lest you think the host was too formal). A plush movie theater — illuminated by ornately carved, voluptuous female figures holding light fixtures — plays an old newsreel of various guests at the estate, including Charlie Chaplin on the tennis court.

The star of the Upstairs Suites tour is probably the sumptuous Doge's Suite, inspired by the palace of the Venetian ruler. A pair of well-appointed guest bedrooms boasts precious imported furnishings; the ornate door of one bathroom came from a sacristy in Europe. The suite's luxurious sitting area has walls draped in blue fabric and a ceiling comprised of ornately framed paintings.

Hearst's own bedroom is comparatively spare, with a canopied bed sitting under a 14th-century wood ceiling carved with medieval figures; a similarly modest space across the hall was used by actress Marion Davies, his longtime companion.

Also on this tour is his office, another church-like space with Gothic-style arches, and a comparatively intimate, low-ceilinged library with lined with thousands of books and 150 ancient Greek vases.

Outdoors, visitors can wander the grounds at their own pace. Esplanades around the property are fragrant with flowers and fruit trees, and populated with sculptures and fountains.

The jaw-dropping Neptune pool is surrounded by ancient Roman columns, a temple pediment and 17th-century Italian bas-reliefs; its terrace offers spectacular views down to the sea.

The path back to the bus takes you through the stunning indoor Roman pool, its blue-and-yellow mosaic tiles accented by marble statues, standing lamps and the occasional sunbeam through a skylight.

The Cottages and Kitchens tour includes Hearst's extensive wine cellar and three guest homes — one of which has a ceiling decorated with 22-karat gold leaf.

Most tours last about 40 minutes each, although that length is a bit deceiving: The only way to get to the castle from the well-appointed visitors center is a 15-minute bus ride. It takes you 5 miles up a winding mountain road to 1,600 feet above sea level.

As you ascend, a recording by "Jeopardy" host Alex Trebek narrates the history of the property. Any questions you still have when you get off can likely be answered by the extremely knowledgeable tour guides on the hilltop. Each tour also includes a ticket for a 40-minute movie about Hearst at the visitors center; in addition, there are several biographies for sale in the extensive gift shop.

Truth be told, had I ever merited an invitation to the castle back in Hearst's day, I would have been terrified to touch the furniture, much less sleep in the lavishly decorated guest suites. It's hard to imagine people living, dining and socializing in what today feels more like a museum.

Turns out I'm not alone. So during winter and spring, the park system offers a night tour in which tourists can mingle with people in period costume.

Or, if you have some major cash to spare, you can populate the estate with your own friends: The Hearst Castle is available for rent.