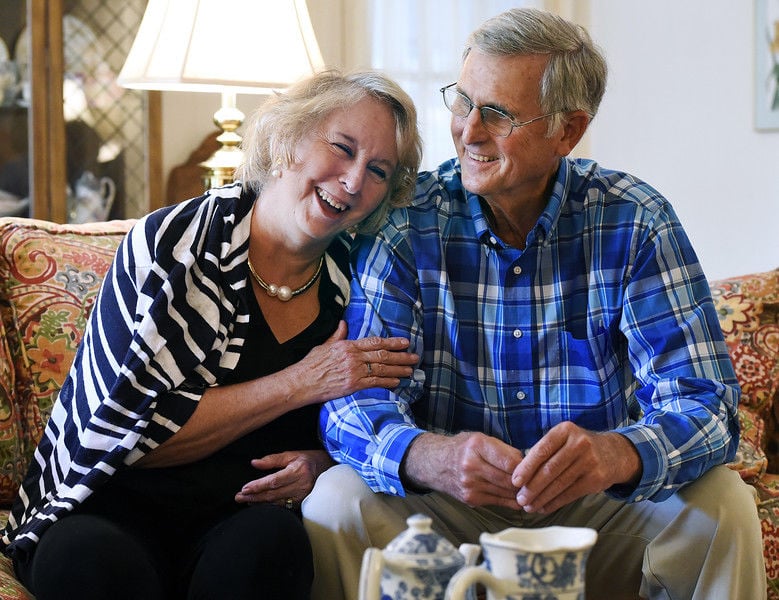 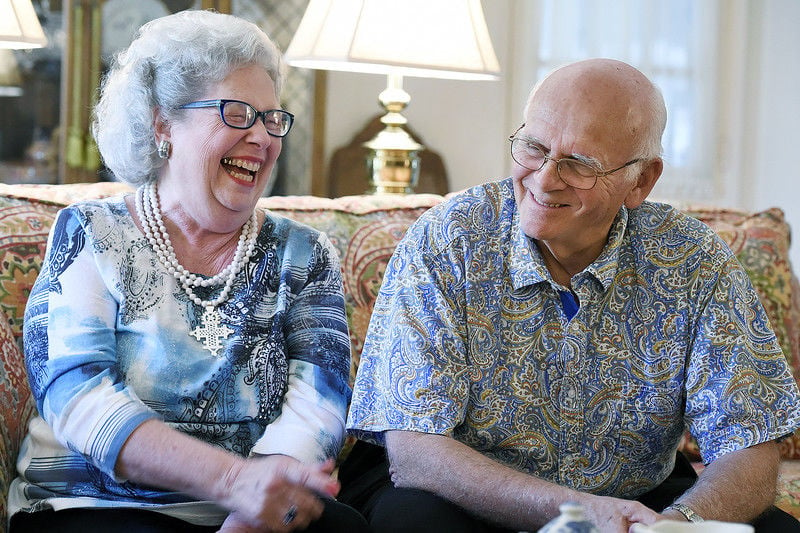 Mary and Ron Gammell laugh Tuesday, July 19, 2016, as they recount how they met when she asked to borrow a pair of hiking boots while they were counselors at a youth camp in Colorado, at their home in Tyler. Andrew D. Brosig/Tyler Morning Telegraph via AP 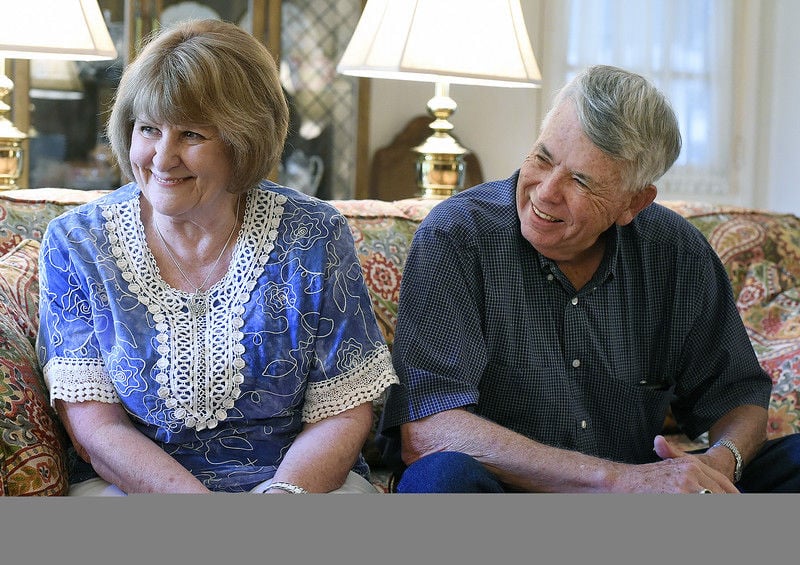 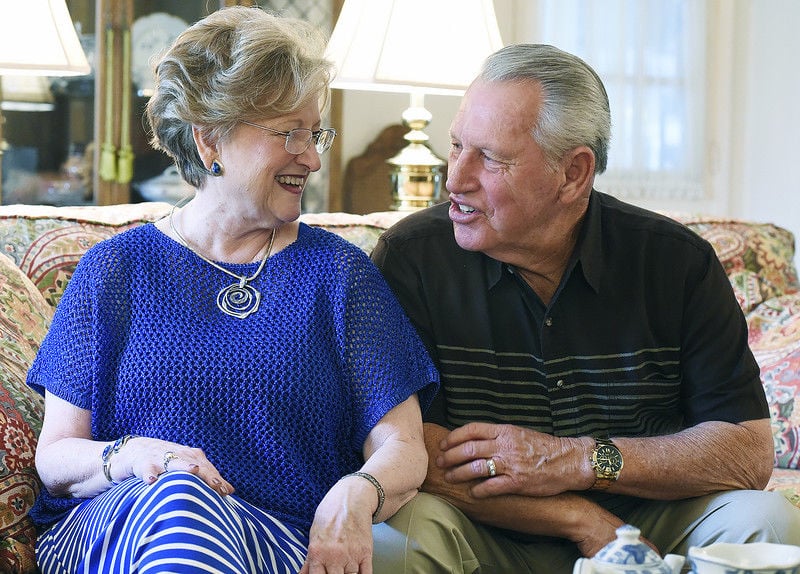 Lauren and Marshall Burkett talk about their lives together Tuesday, July 19, 2016, in Tyler. Andrew D. Brosig/Tyler Morning Telegraph via AP

Mary and Ron Gammell laugh Tuesday, July 19, 2016, as they recount how they met when she asked to borrow a pair of hiking boots while they were counselors at a youth camp in Colorado, at their home in Tyler. Andrew D. Brosig/Tyler Morning Telegraph via AP

Lauren and Marshall Burkett talk about their lives together Tuesday, July 19, 2016, in Tyler. Andrew D. Brosig/Tyler Morning Telegraph via AP

On a single, sultry August weekend in 1966, four young couples gathered before sniffing friends and family to tie the knot, pledging lives and loyalty to one another, ‘til death do them part.

After the photos and cake cutting, the nervous newlyweds drove off into the night, filled with hope and optimism for their new lives together.

Marshall and Lauree Burkett; Mary and Ron Gammell; John and Susan Steffee; and Will and Judy Turman married in separate ceremonies, but the vows they exchanged on that long-ago weekend held strong, for 50 years and counting.

Photos of the four brides in long flowing dresses were featured in the Tyler Courier- Times--Telegraph, but years would pass before anyone realized the happy coincidence.

It seems seven of the eight young lovebirds became professional educators, while Gammell pursued a different route, establishing a career in insurance.

About mid-way through the teachers’ work careers, it was realized the brides featured on that yellowing 1966 newspaper page were actually co-workers and acquaintances.

The couples have been gathering together for the past 30 years to celebrate the bond, and sat down recently to recall moments that changed their universes forever.

A not-so-random encounter in English class led to married bliss for Marshall and Lauree Burkett of Tyler.

She caught him copying off her notes. “I thought she was very attractive,” Burkett, 73, said with a grin.

Apparently the attraction was mutual, because she didn’t tattle to the teacher.

“He was very cute,” she said. “There was a connection, and he asked me out.”

The education majors soon became inseparable and decided to make their relationship permanent.

He proposed on Valentine’s Day, and she didn’t hesitate to accept.

“We were beginning school teachers with no money, so the honeymoon was limited to Six Flags over Texas in Dallas,” Mrs. Burkett, 72, said. “Two years later, we bought a brand new Buick and drove to Acapulco, Mexico.”

Burkett was fluent in both English and Spanish, so they relied on the locals to point out the way to their destination.

“There was no GPS or smartphones in those days,” she said. “It was a great second honeymoon, touring Mexico City and then staying in a cabana on the cliffs where Elvis made the movie, ‘Acapulco.’”

The couple went on to raise a family and today enjoy doting on the grandchildren.

Both credit their faith in God with helping keep things on track all these years.

They devote time to church leadership, projects and mission activities, such as teaching Bible school.

Life is still an adventure, it seems.

Burkett said they try to laugh a little every day, even about the mundane things that come with life.

“Not much has changed over the years,” he said, eliciting a giggle from his wife. “Except gravity has taken over.”

The couple said they plan to celebrate their golden anniversary with a trip to California’s Napa/Sonoma Valley area, although every day is viewed as a special occasion.

“Our love grows stronger every year,” she said. “It really does.”

A lack of planning seems to be the spark that ignited a lifelong love between Ron and Mary Gammell, of Tyler.

When they met, the pair was working as camp counselors in Colorado, only she didn’t pack for a mountain adventure.

She was cold and desperate for rugged attire.

“I was looking for someone with the same size feet as mine,” Mrs. Gammell, 73, teased. “I had to have some hiking boots … I have a huge foot.”

She asked around and found a handsome young gentleman with a perfect size match.

He graciously forfeited the footwear for a chance to reconnect with the pretty girl who wanted them.

“I went barefooted for a couple of days,” Gammell, 73, said. “I liked those boots, and I made sure I got them back.”

The shoe swap set the stage for continued calamity, including a first date that ended with a flat tire and a long-distance romance across several states when camp concluded and everyone headed home.

Gammell eventually went back to Iowa and his sweetheart stayed in Tyler, but they kept in touch through letters and visits and eventually married.

When he went to serve in Vietnam, she stayed behind, writing a letter a day until his safe return to Texas where they raised two children.

Today, they enjoy spoiling the grandchildren and devoting time to church and civic activities.

Decades later, the couple credits God with helping them weather the tough times.

“We trust in Him and in each other,” she said.

The couple was attending college in Denton and joined a couple of friends to eat seafood.

A second outing followed, as did another and another.

They dated about a year and a half and then he got up the nerve to make things permanent.

It’s been rumored Steffee proposed to his sweetheart on a strip of road off of Old Jacksonville Highway, believing the locale was lucky.

He had apparently won many drag races there and figured if his good fortune held out, she would accept his offer of marriage.

His hunch was spot on.

The couple raised two children and still set aside time to pursue one of their favorite past times: travel.

After so many air miles and jetlag fatigue, this couple seems to understand what it takes to make a marriage work.

They apparently don’t have to travel far today to enjoy the fruits of their labor.

Both of their daughters and grandchildren live nearby.

“We love being able to share in their lives and become part of their memories,” she said. “We thank God every day for our blessed life.”

It’s a good thing for Will and Judy Turman that opposites really do attract.

The Flint couple grew up in the same church, but it wasn’t until they were older, attending Tyler Junior College, that things began to click.

They spotted one another in English class, and she asked for a date.

“Our sorority had an event,” Mrs. Turman, 73, said. “I needed someone to take me. I wasn’t embarrassed to ask Will to go with me. He came in handy.”

Turman said he didn’t mind helping out. He was impressed with her beauty, social ease and intellect.

“In the classroom, she could answer any question Mrs. Bryarly would ask,” Turman, 72, said.

Their outing wasn’t that painful, so he decided it wouldn’t be so bad to have a second.

“We dated for three years before we decided this was it,” she said.

They were, after all, opposites.

Throughout their marriage, they learned to embrace their differences, a big one being travel.

Mrs. Turman, a Fulbright-Hays Scholar, traveled with other educators for projects and research, to remote places such as Istanbul.

“He encouraged me to go and was happy not to,” she said. “He doesn’t like travel and especially on planes.”

He grew to love their travel adventures, especially when their children and grandchildren join in.

A steadfast belief in God is the foundation of their joy today, they said.

“She’s so good in so many situations,” he said. “I still think she’s very attractive.”