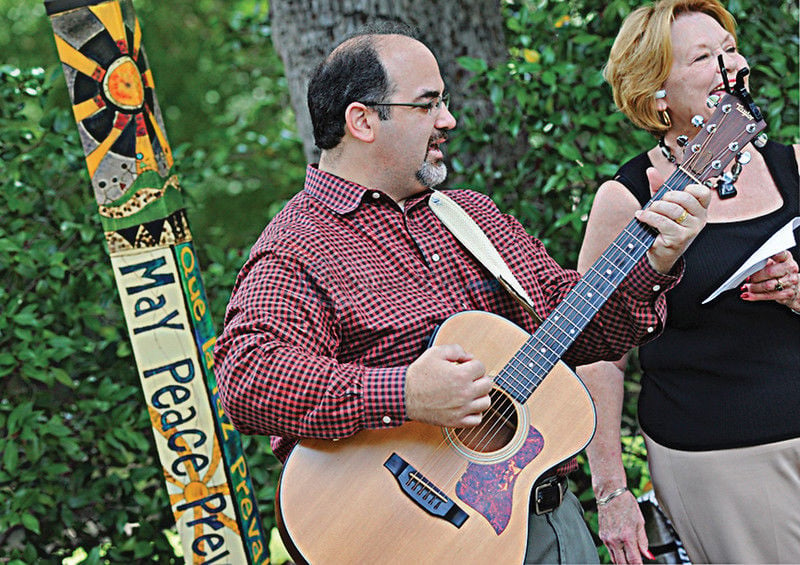 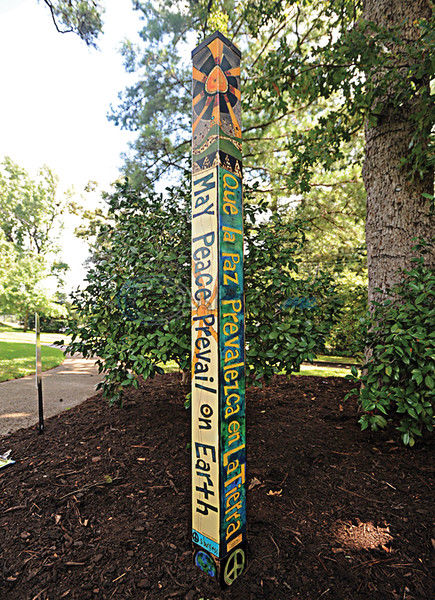 The peace pole sits at the Rose Garden with the phrase "May peace prevail on Earth" writen around it in four languages. (Victor Texcucano/Staff) 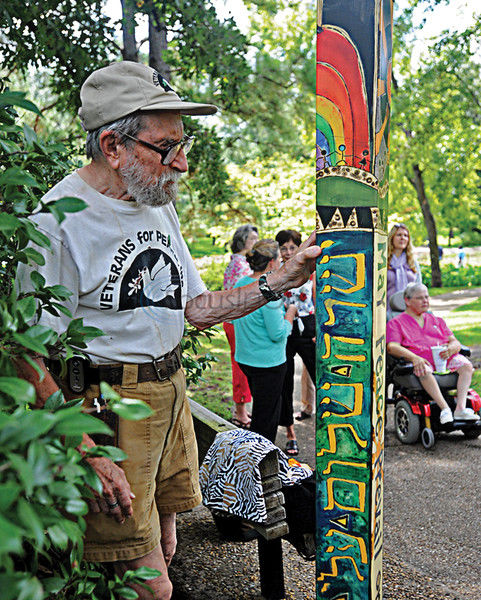 Elihu Edelson, a veteran of World War II and representative for Veterans for Peace in Tyler, admires a new peace pole, which was dedicated during a Wednesday afternoon ceremoney in the Tyler Municipal Rose Garden. (Victor Texcucano/Staff) 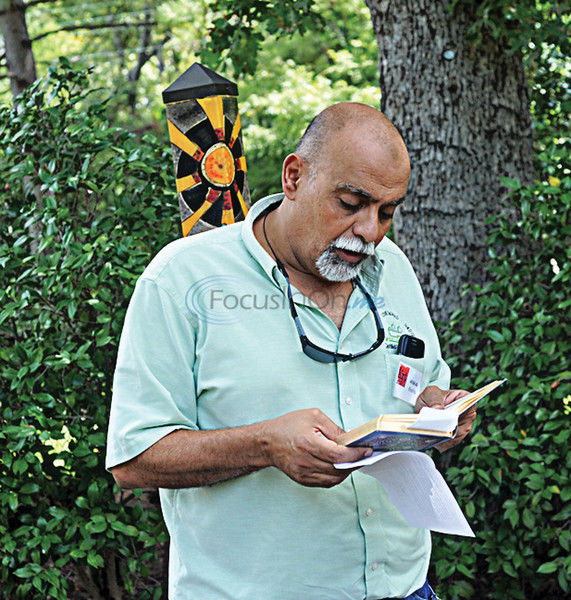 The peace pole sits at the Rose Garden with the phrase "May peace prevail on Earth" writen around it in four languages. (Victor Texcucano/Staff)

Elihu Edelson, a veteran of World War II and representative for Veterans for Peace in Tyler, admires a new peace pole, which was dedicated during a Wednesday afternoon ceremoney in the Tyler Municipal Rose Garden. (Victor Texcucano/Staff)

With hands clasped and voices raised, a small group of East Texans in the Tyler Rose Garden sang, "Let there be peace on Earth, and let it begin with me."

The song marked the completion of the dedication of a Peace Pole, one of many activities taking place this week as part of the Fourth Annual Art of Peace Festival in Tyler.

The festival coincides with the celebration of the United Nations International Day of Peace on Sunday.

Events have included a peace meal and peace forum, along with an upcoming peace vigil, worship service and concert.

"We're hoping for unity, for communication, for understanding, for recognition, that each of us can make a difference by taking some simple steps," festival committee member Liza Ely said. "It's easy to get overwhelmed with all that's happening in the world, but together and individually we can make a difference."

The peace pole stands more than five feet tall and features the phrase "May Peace Prevail on Earth" in four languages: English, Spanish, French and Hebrew.

The pole is colorful with images, including a rainbow, sunshine and people holding hands. The pole is off of a Tyler Rose Garden sidewalk behind the Main Fountain and Queen's Court Lawn.

Ms. Ely said the history of peace poles dates back to World War II when after the destruction caused by the atomic bomb, a Japanese citizen was inspired in prayer to be a voice for peace, Ms. Ely said.

From that vision, the peace pole project was created. Now, it's the official project of the World Peace Prayer Society, which is based in New York.

People have dedicated an estimated 200,000 peace poles worldwide, according to the society's website.

Ms. Ely said the peace pole is the most recognized of all international peace symbols and monuments.

Gilberto Avila, pastor of One New Creation Church in Tyler, prayed in Spanish and English asking the Lord to bring peace to the world and praying specifically for different continents, countries and people groups.

"Peace happiness and blessing," he said. "Grace and love and mercy — may these descend on us, and all people. Bless us our creator one and all with the light of your presence for by that light God you have revealed to us the law of life, to love kindness and justice and mercy to seek blessing, life and peace. Bless all your peoples with enduring peace."

Anwar Khalifa, of the East Texas Islamic Society, read from the Quran before speaking in English.

"Praise be to the Lord of the universe who has created us and made us into tribes and nations that we may know each other not that we may despise each other …" he said. "If the enemy inclines toward peace, do you also incline toward peace and trusting God? For the Lord is the one that hears and knows all things, and the servants of God most gracious are those who walk on Earth in humility, and when we address them we say ‘salaam' peace."

Alicia Coltzer, lead pastor of Pollard United Methodist Church, prayed emphasizing that God created humans in His image, but we sometimes fail to see that in each other. She asked God to forgive us when we don't recognize that and help us to see His light of love in each other. She prayed for peace in the world.

"You are the author of peace and that's what we ask," she said. "Bring peace to our world across the world whether that's in the nations on the big scale, but also to the individual homes."