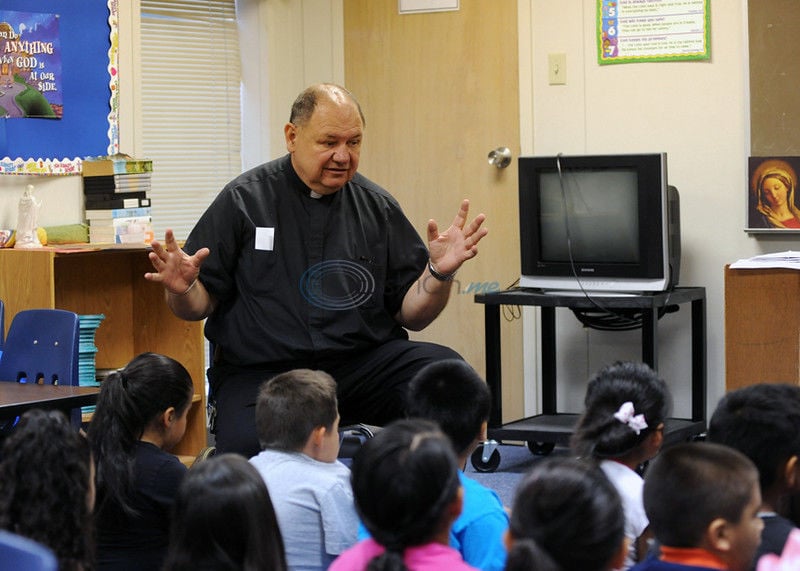 Father Mark talks to children during Vacation Bible School class on July 17 at Our Lady of Sorrows. (Victor Texcucano/Staff) 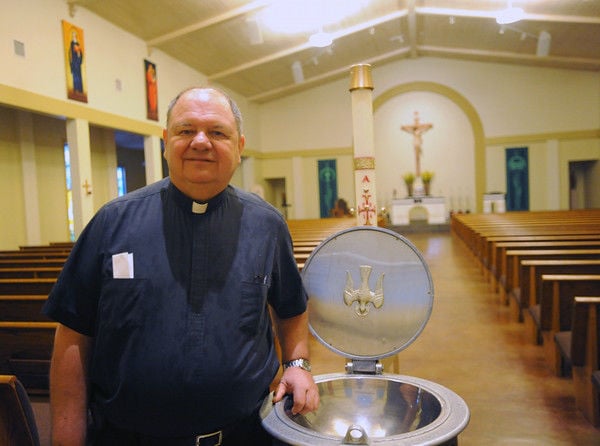 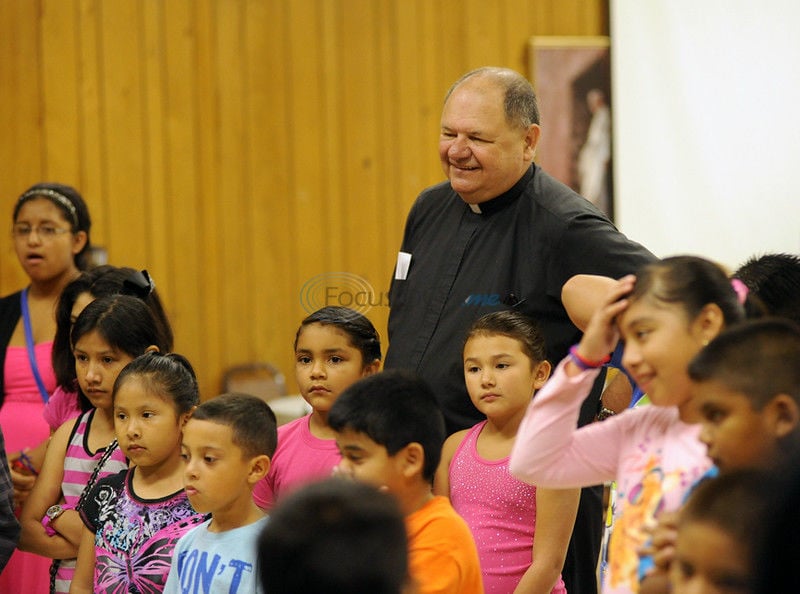 Father Mark talks to children during Vacation Bible School class on July 17 at Our Lady of Sorrows. (Victor Texcucano/Staff)

When Police Chief Reece Daniel came to Jacksonville in 2006, he came with a heavy heart.

His father had died a month before, and the chief was having a hard time in the new city.

Father Mark Kusmirek, the pastor of Our Lady of Sorrows Catholic Church in Jacksonville, came by one day for a friendly visit.

"I was really, really having a hard time with it," Daniel said. "Father Mark came and talked to me. We talked an hour. That made such a difference in my life."

The two became steadfast friends, and the Daniel family joined the congregation.

"Father Mark," as the town knows him, came to Jacksonville in 2005, and quickly became prominent figure of compassion in the community. He was even named "Businessman of the Year" by the Jacksonville Chamber of Commerce in 2010.

"With him, it's about them being human, and I've never met a more human person than him," Daniel said. "I've met a lot of good and bad people, but I have never met anyone who has as much humanity as he does."

Kusmirek, 63, an Ohio native, was ordained in 1977. He served in several parishes but came to East Texas after a friend invited him to the area. Kusmirek also served for three years as a Navy chaplain working with Marines. While in Cherokee County, he also has worked with churches in Rusk and New Summerfield.

Under Kusmirek's leadership, Our Lady of Sorrows started community programs.

The church started a food pantry, which now serves about 120 households a week, and a community garden that is open to the public. He said the garden supplements the food pantry, which can provide two or three meals to families each week.

"There are no requirements to be Catholic for any of our programs," he said. "If you're hungry, come and eat. … If people need food (from the garden), take the food. There's no fence around it — it's there for the people."

"About 30 people volunteer there regularly," he said. "It's funded by contributions from our parish … and it's that old saying ‘God provides.' I think their bank account hovers around $12, but there is always enough in there when their next shipment of food comes in, and we always have just enough."

The parish hosts a summer food program sponsored through the East Texas Food Bank, to ensure children have at least one hot meal in the summertime.

Soon after Kusmirek arrived, he heard that more than 80 percent of students at Jacksonville ISD were economically disadvantaged and sought help, so he organized a back-to-school fair and began to network with other churches, nonprofits and businesses to send them to school with the proper supplies.

In its ninth year, the annual fair will send between 600 and 800 kids to school with two district-approved uniforms and a backpack of school supplies.

"Kids need help. Parents need help, and to have a child go to school on the first day and have all, if not most, of the school supplies they need, and they are wearing a new uniform that they just got — if that helps a kid get one better grade, if that helps spark an interest in one subject, well that's a winner," Kusmirek said. "That could help them for the rest of their lives."

The attendance on Sunday has also doubled during Kusmirek's tenure from about 600 in regular attendance to roughly 1,100.

"You do what you say you're going to do, and you treat people with care," he said. "They are all God's creatures."

Kusmirek said the increase came from old-fashioned sweat equity, but he doesn't count success in the number of people in the pews on Sunday but rather in change in the community.

"There are no ‘one-man shows,'" he said. "It really takes people working together to (make) substantial change, and if you can change something 2, 3, 5 percent, (that) would be amazing, and the long-term effect is astounding."

Kusmirek will leave his post at Our Lady of Sorrows to head St. Mary's Catholic Church in Longview. He takes over on Aug. 1.

"He's a very special person, and he touched so many people's lives," Peggy Renfro, president of Jacksonville chamber, said. "He gained a lot of friendship here, and I will definitely miss him."

Kusmirek said Jacksonville became his home, and the people in it were like family, but he is looking forward to the change. The move is bittersweet.

"I can only take one thing with me, and I can chose to be happy or miserable anywhere. I chose to be happy," he said. "I have no other sisters or brothers. Wherever I am is home to me. I don't have any other place I have to be … We are always on a pilgrimage, and this is the latest stage in mine."

WHO WE ARE TMT
TMT Veteran's Day Promo