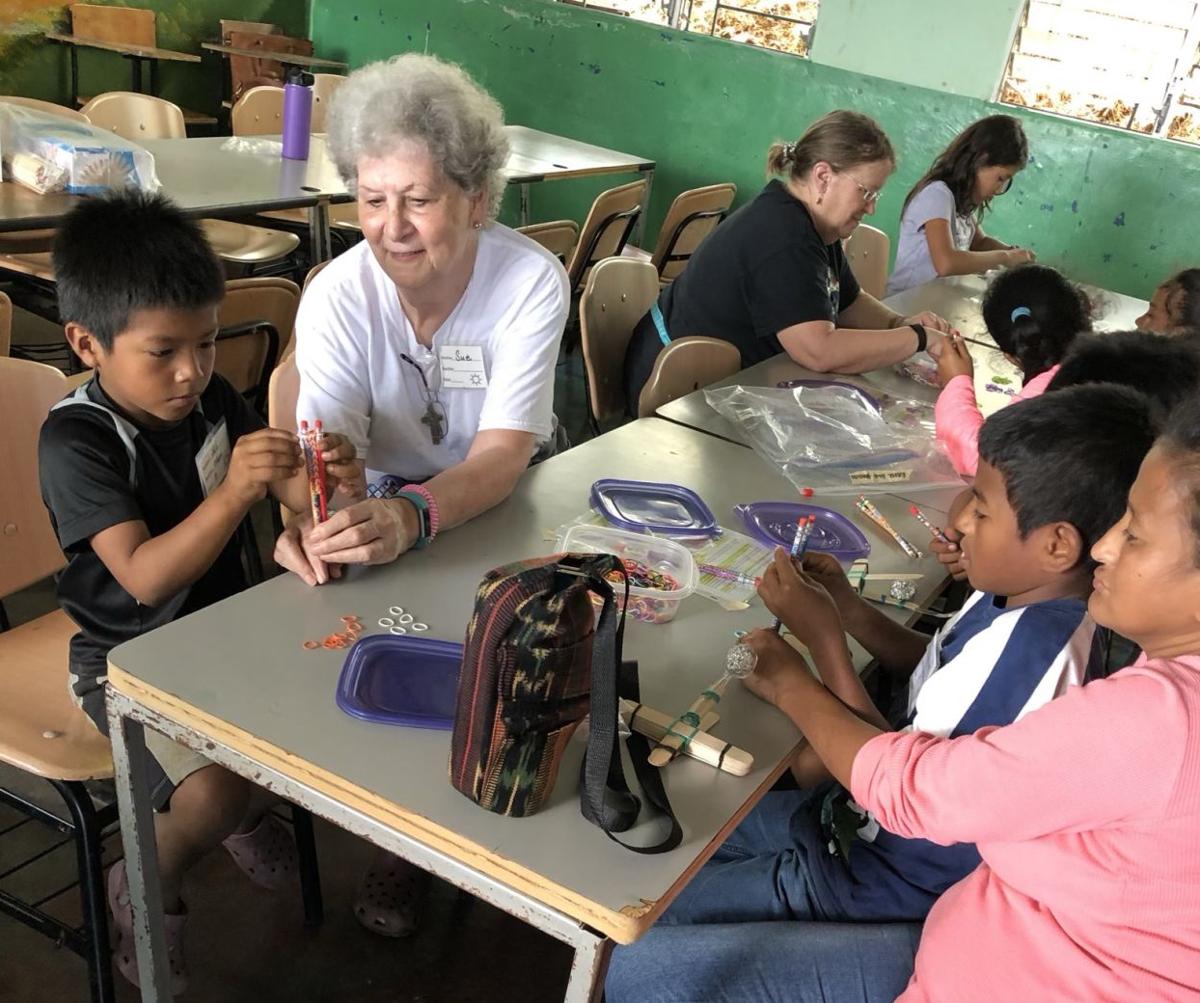 Sue McCuistion (in white) helps a boy with a crafts project during a vacation Bible school in Panama. 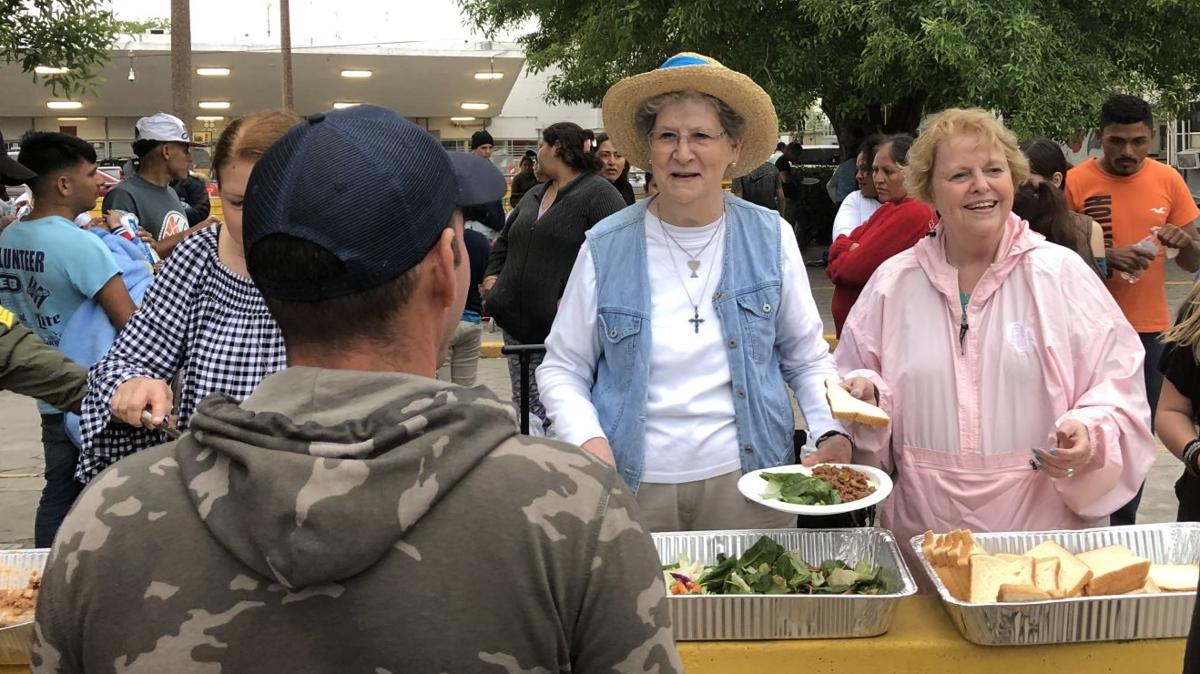 Sue McCuistion, of Tyler (wearing hat), helps feed the hungry during a mission trip in Mexico. Fluent in Spanish, organizations and church groups call upon her as an interpreter. 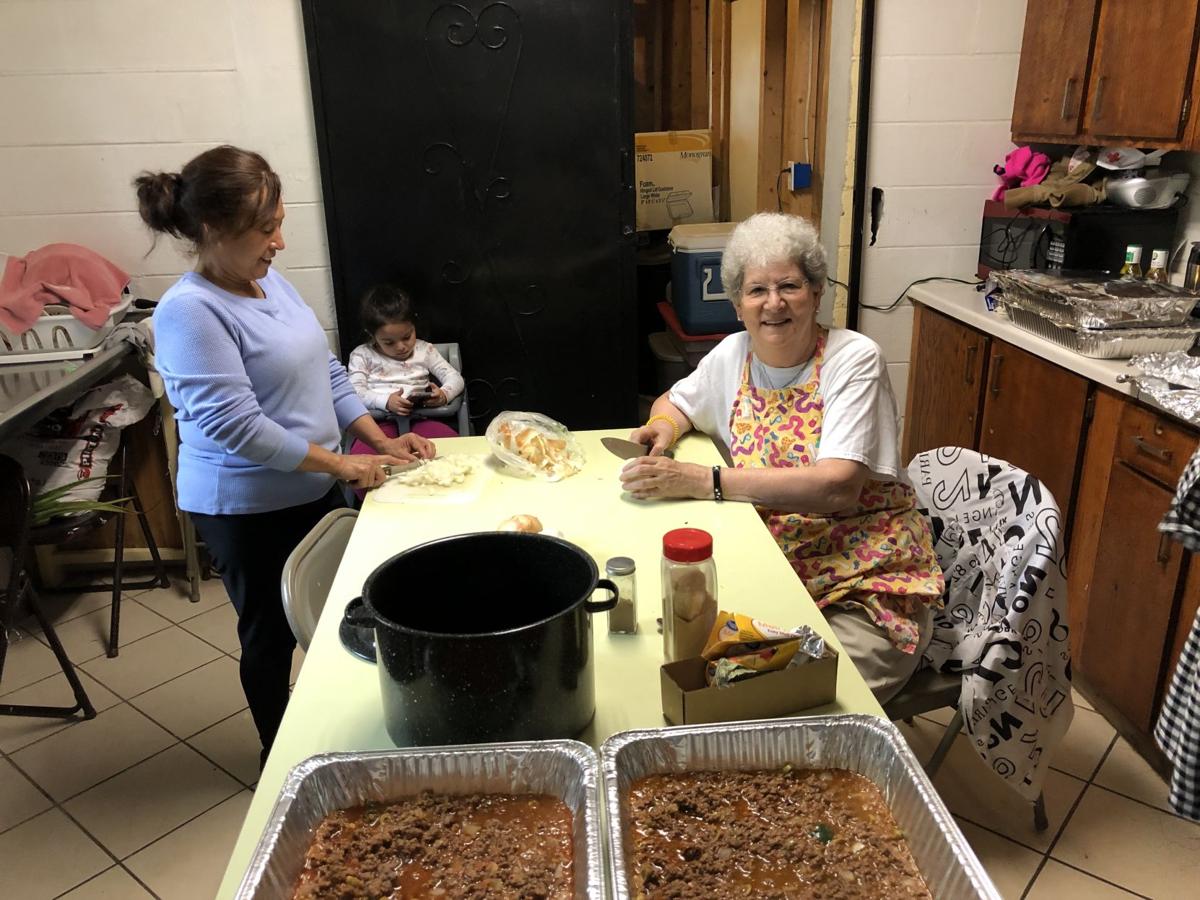 {span}Sue McCuistion works in a kitchen during a mission trip in Mexico. She uses her skills as a Spanish-speaking translator on church and humanitarian trips in Central and South America. {/span}

Sue McCuistion (in white) helps a boy with a crafts project during a vacation Bible school in Panama.

Sue McCuistion, of Tyler (wearing hat), helps feed the hungry during a mission trip in Mexico. Fluent in Spanish, organizations and church groups call upon her as an interpreter.

{span}Sue McCuistion works in a kitchen during a mission trip in Mexico. She uses her skills as a Spanish-speaking translator on church and humanitarian trips in Central and South America. {/span}

Indigenous women residing in the mountains of Panama recently heard Tylerite Sue McCuistion translate from English to Spanish instructions about how to sew net tote bags for use in carrying home items from a grocery store since Panama has banned plastic carry-out bags.

Due to the absence of electricity, the sewing machines were hand-cranked. McCuistion also translated for a sewing class on how to make hand-made sanitary napkins.

The women walked hours to the seminars at a church at the end of a rock and dirt road in the jungles of Panama.

McCuistion translated for a team from a Church of Christ in Lubbock that had come to Panama on a mission trip.

Next, she translated for a medical team set up in a school on the highest mountain in Costa Rica, writing down in English the answers of people who spoke only Spanish information about their ailments before they were seen by a doctor. Most had never before seen a doctor.

McCuistion said, “Most of the ailments in Latin America are headache, sore throat, lung congestion, stomach aches, diabetes and high blood pressure. All of the people who live in the country have stomach problems because they don’t have potable water. If they live in a city, they have great water.”

Four years ago, McCuistion began making three or four trips a year to Latin America as a translator for mission teams associated with different organizations, such as churches, the United Methodist Committee on Relief and the General Board of Global Ministries.

McCuistion is fervent about helping Latin American people who don’t speak English, don’t know how to help themselves and don’t have the opportunities that poor people in Tyler have. She said, “I feel that is where I need to step in and help with translation.”

She developed compassion for Latin Americans and learned Spanish while accompanying her late husband as he worked several years as an administrator in Peru, Guatemala and Mexico, all Spanish-speaking countries. She also studied Spanish while pursuing bachelor’s and master’s degrees.

McCuistion said she has to listen closely when translating because each country has its own Spanish dialect.

The missions she goes on are for different periods of time — a week, two weeks, six weeks or three months.

McCuistion said, “I’m a volunteer. I don’t get paid. The only payment I get is the pleasure of serving others and being the hands and feet of Jesus. It’s a great satisfaction to know I can do for others the things they can’t do for themselves. The joy of doing these things is knowing there is no way they could pay me back.”

Referring to her efforts teaching women in Panama to sew and translating for patients waiting to see a doctor, McCuistion said, “They didn’t know how to sew and I helped them do that. They couldn’t tell the doctor how they felt and I could do that.”

McCuistion translates from Spanish to English for mission teams and from English to Spanish for Latin Americans being helped by the teams during her trips to Panama, Costa Rica, Mexico and Guatemala.

McCuistion said some groups that have sponsored her trips to Latin America have said that an “enormous” amount of paperwork is among the many requirements that take place for her to receive permission to enter the countries.

Wherever she goes, McCuistion said, the fun part of her trip is playing with the children.

She intends to translate for a mission team going to Guatemala in November from Arlington Heights United Methodist Church in Arlington.

On a trip to Guatemala last year, she translated for a team in Guatemala that built stoves. The women in Latin America cook over an open fire, piling sticks in a certain way and cooking one dish at a time. The wood used to make the fire has tar in it, so walls of their kitchen end up with tar on the walls and hanging from the ceiling.

As a result, McCuistion said the women get congested lung problems and headaches and children occasionally fall into the open fires. The stoves that the team built are ventilated with a pipe, so they alleviate both problems, she said.

One week while in Guatemala, McCuistion taught vacation Bible school and translated for a mission team. The children made coffee filter parachutes, bracelets out of rubber bands and other items.

While volunteering at a Spanish seminary in Costa Rica last year, McCuistion translated from Spanish to English for English-speaking patrons who came to the library where she was a volunteer. She learned the Dewey decimal system for filing books and also learned how to check in and check out library books.

Besides serving as a translator, McCuistion has gone on a mission trip to the Texas-Mexican border with a group from Tyler First Christian Church, serving food and working in a medical clinic triage.

She occasionally goes on mission trips to Louisiana and New Mexico.

Her first mission work involved taking a team 12 years ago from the Arlington Heights Methodist Church to McCurdy Ministries for Children in New Mexico, where they mowed, cleaned windows and did other volunteer work. She goes there every year.

McCuistion also goes to Baldwin, Louisiana, where she joins other mission team members to handle community relations. One year, they checked donated hygiene kits to make sure they were the proper weight for shipment to South Sudan.