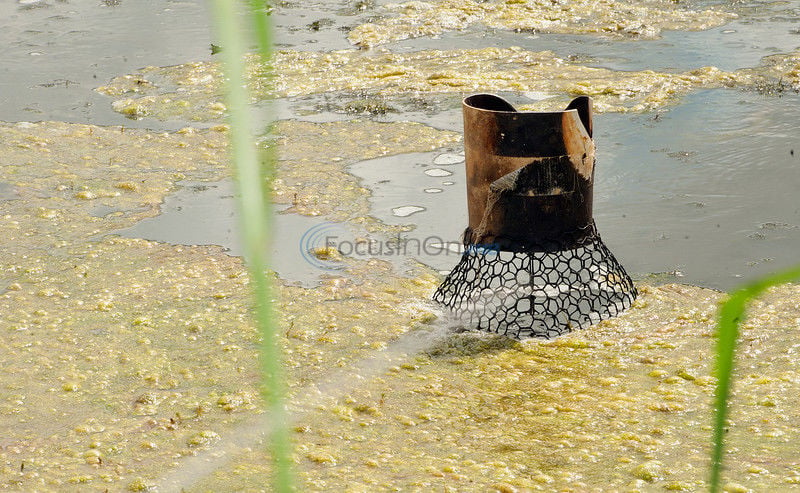 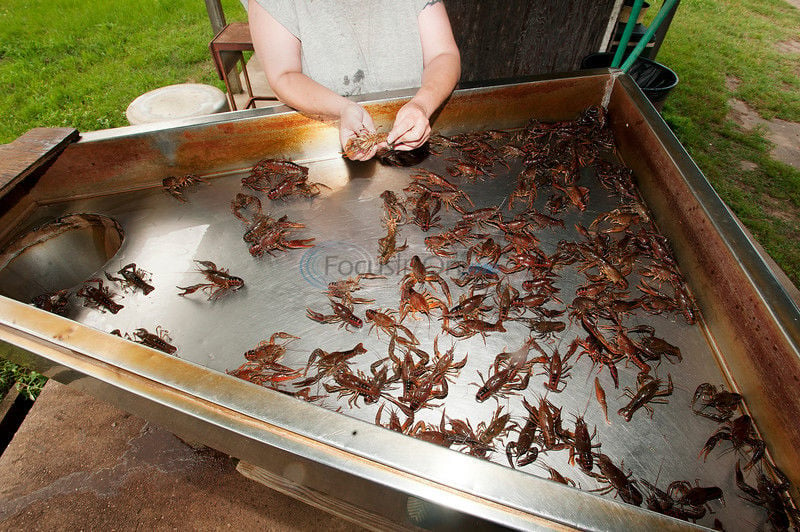 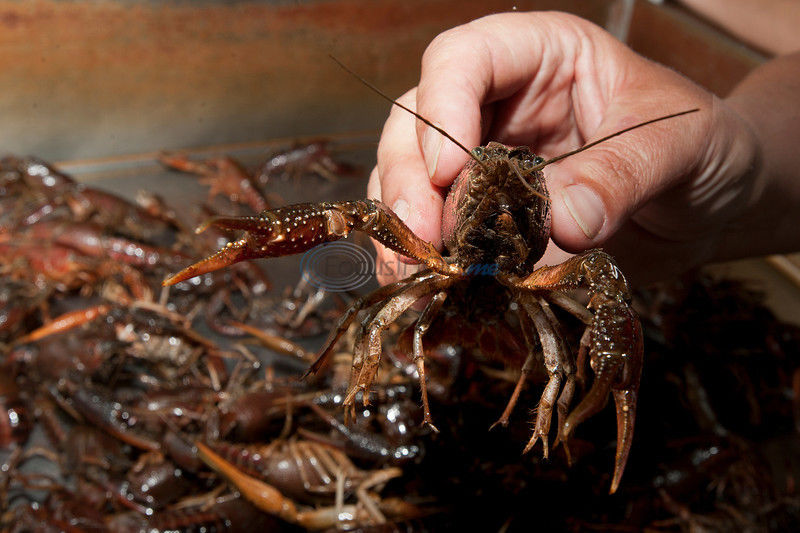 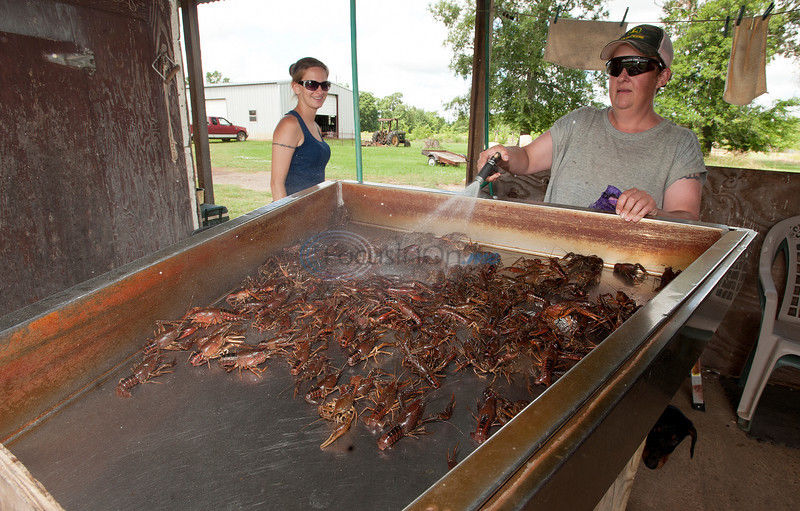 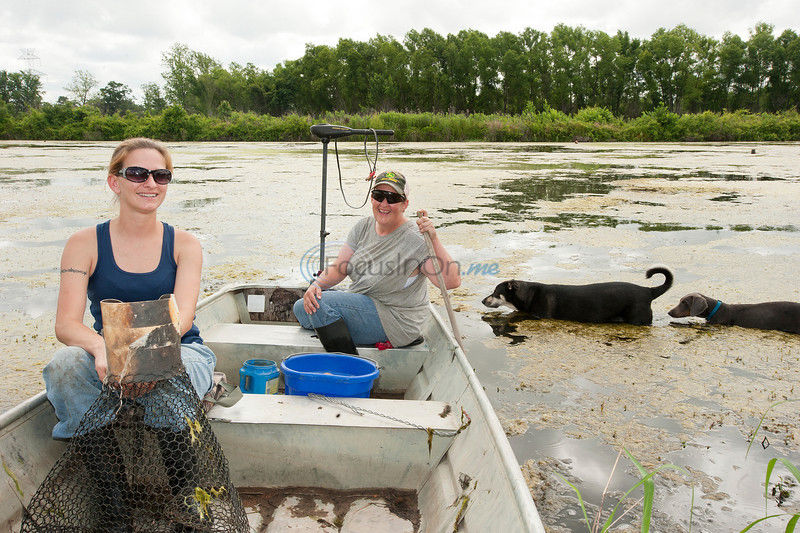 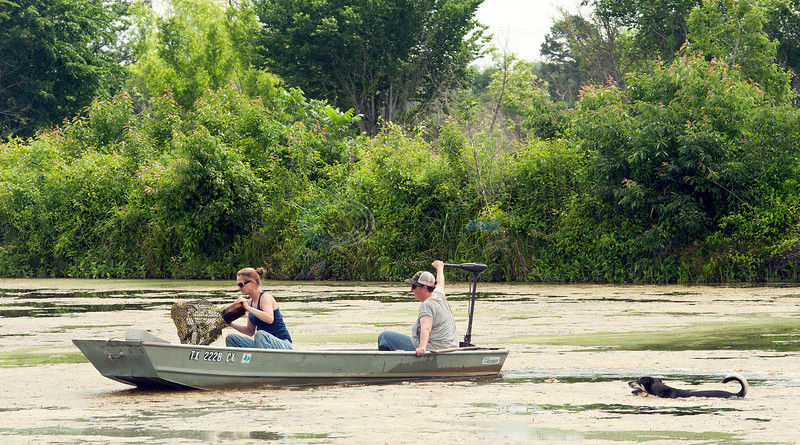 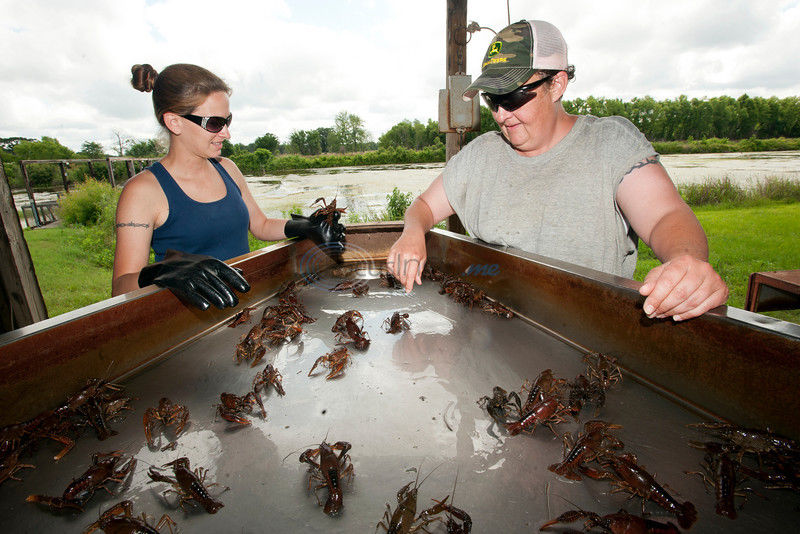 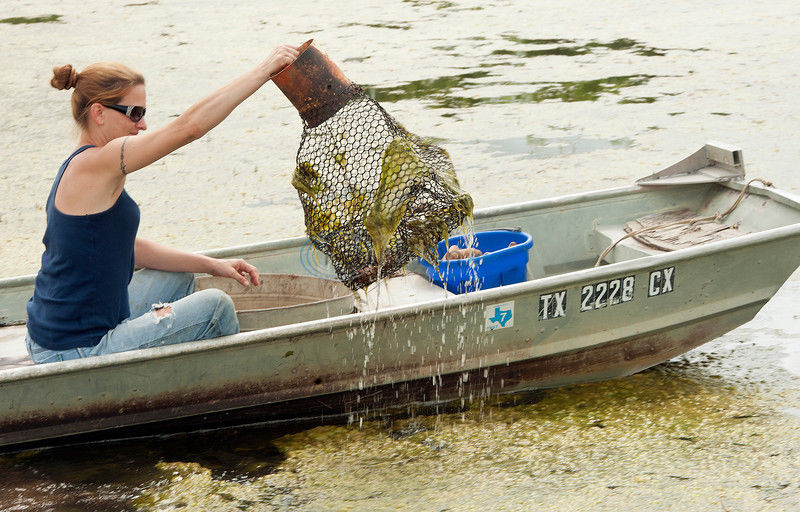 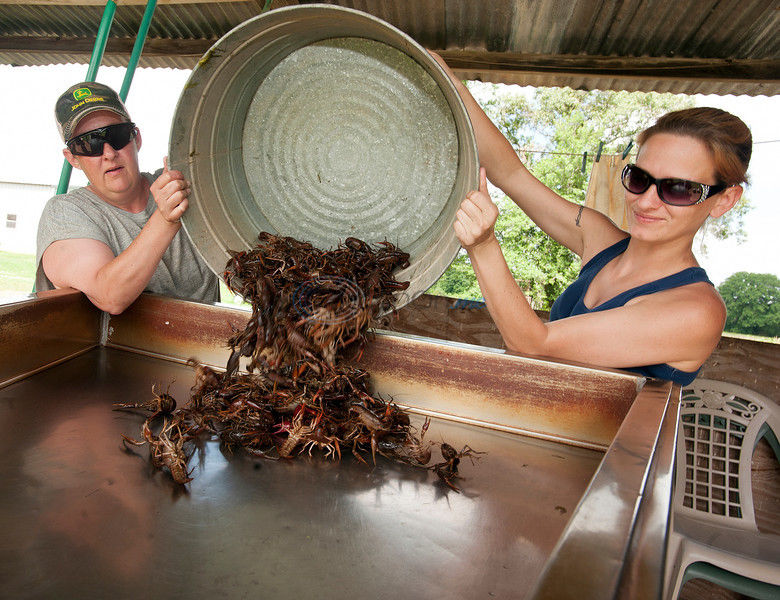 FRANKSTON — Kris Snead doesn't have a long commute to work.

When she walks out of her house each morning, she doesn't get in her car to head to the office. Instead, she climbs into a 14-foot flat bottom jon boat to harvest crawfish on the 63-acre Caddo Creek Crawfish Farm, which sits nestled in the woods down a winding road not far from Frankston.

Ms. Snead, 39, usually starts at daybreak to beat the heat and wind. It takes her four to six hours to check and empty the more than 600 traps set in eight ponds totaling 31 acres. Every trap is checked every day, and each one can contain one crawfish, up to 3 pounds, she said.

The crawfish farm was built in 1972 by Bill Yeager, who was a pharmacist. Everyone thought he was crazy but "it's still going strong today," she said.

Ms. Snead believes it is one of the only and oldest crawfish farms in East Texas.

After Yeager retired, the farm went through a couple of owners and Ms. Snead began working there 10 years ago before becoming co-owner. She grew up as an "Air Force brat" and served as a welder in the U.S. Navy for more than 10 years.

After getting out of the service and going to college, Ms. Snead needed a job and after living in so many places, chose East Texas to settle down because of its beauty. She counts herself lucky to have found the crawfish farm, which has Caddo Creek running through the property, to work.

"This is my home … I'll take my last breath out here," she said as she looked over the farm. "I fell in love with the people and the land."

Ms. Snead taught herself how to farm crawfish.

"I learned trial by fire," she said. "Over time, you get to know the land and know what you're doing."

One of her favorite parts of the job is being outside. Even though getting wet, muddy and sweaty comes with the job, she enjoys the peaceful, quiet beauty.

Danielle Reichert agreed. "I get up ready to come out here," she said.

With five kids ranging from 5 to 15, Mrs. Reichert, 30, likes the quietness of the ponds. She has been buying crawfish at the farm for about seven years and started working there in April. She was a stay-at-home mom before working for Ms. Snead.

"It's really fun," she said. "I like to be outside, getting wet and muddy."

Ms. Snead drives the boat while Mrs. Reichert, of Poynor, empties and resets the traps. After the crawfish are harvested, they are put on a sorting table, washed three times, picked, sorted, sacked and stored in the walk-in cooler to await customers.

Customers call no later than Wednesday or Thursday to order how many crawfish they want that weekend and pick them up on Friday, Saturday or Sunday.

Ms. Snead sells out — from 900 pounds to 1,200 pounds — each week during the season, which typically runs from January or February through the end of June. The colder-than-usual weather this winter delayed the season until March.

Ms. Snead will boil the mud bugs up for customers or will sell them live.

"I have such a wonderful relationship with my customers," she said. "It's not the transaction, it's the experience. … They see where their food is coming from."

Often, customers will come out and "sit and jaw" while their crawfish is cooking and some even stop by for visits during the offseason. She has customers come from Dallas, Louisiana, Arkansas and Missouri. Her farthest customer lives in Seattle and flies his private plane to see his parents in Frankston, making a stop at her farm.

She also sells Savoie's smoked alligator sausage, as well as boiled or uncooked shrimp from the Gulf. Boiled crawfish and shrimp come with corn and potatoes and customers can bring their own mushrooms or vegetables to throw into the pot.

Ms. Snead would put her crawfish up against anyone — and believes she'd win every time. They are boiled with award-winning spices and everything is cooked fresh to order, she said.

"I have some diehard fans," she said, adding that a lot of her customers have been coming for years. She has even seen three and four generations of families.

Jamie Dement, of Mount Selman, has been going to Caddo Creek Crawfish Farm for about 14 years and said Ms. Snead has adopted his family as her own.

"It would be hard to keep me away from there," he said, adding that he eats crawfish whenever he can. He and his wife, children and grandchildren also go the farm just to visit and bring Ms. Snead homemade chocolate goodies for Christmas, he said.

Dement, a self-proclaimed "jack of all trades," said the entire experience at the farm is what makes it so good.

"The whole nine yards is what I like," he said.

Dement said he is an outdoor person and loves looking out over the ponds, watching the birds and frogs, as well as the ducks in the winter and quail in the fall.

FOR LOVE OF CRAWFISH

Taking care of the ponds is like caring for a big outdoor fish tank, Ms. Snead said. Every once in a while she turns on a large aerator, which turns like a Ferris wheel, circulating the water and providing needed air to the crawfish.

The largest pond is 13 acres, but the water in each pond is about as deep as the crawfish trap is tall — about 18 to 22 inches. Traps look a little like a hot-air balloon made of wired netting and can be seen sticking out of the water. They are baited with cubes made of fish meal and corn meal that dissolve in the water or fresh fish.

Crawfish aren't the only thing Ms. Snead finds in her traps. She has found snakes, turtles, small bluegill or catfish or even otters, who like to eat crawfish, she said.

Ms. Snead's three dogs like to play with and bark at the crawfish and occasionally eat them. Tootsie Pup, a Catahoula Cur mix, likes to swim behind the boat as they pick up the traps.

"She loves to go fishing too," Ms. Snead said. Her other dogs, Apollo and Atticus, both Dobermans, also like the water.

A typical crawfish weighs about 0.5 ounces to 1 ounce but the biggest one she's ever caught was 8 ounces. Mrs. Reichert decided to eat that one.

"That's my perk," she said, adding that she sometimes puts away crawfish for herself.

"My family eats a lot of crawfish," she said. "Even my kids love it."

Ms. Snead and Mrs. Reichert never tire of eating crawfish. They often boil some up for themselves for lunch while they're working.

"What's for lunch? You're looking at it," is how their conversations usually go, Mrs. Reichert said.

In the offseason, Ms. Snead is prepping the ponds for the next year.

She starts draining them slowly in June, encouraging the crawfish to burrow up to 3 feet into the ground. Once the ponds are filled back up, they start to dig out and spawn.

"They pretty much reproduce themselves," she said.

Male crawfish live about a year while females will live two to three years.

After she drains the ponds, Ms. Snead discs up the bottoms with a plow and plants Sorghum Sudan and different types of millet. Crawfish eat the microorganisms that grow on the plants and because Sorghum is sweet, it makes the crawfish meat sweet.

"I've got the sweetest tales in Texas," Ms. Snead said.

Once the crops start to grow, usually around October, she floods the ponds back up with water and maintains everything until the season starts again.