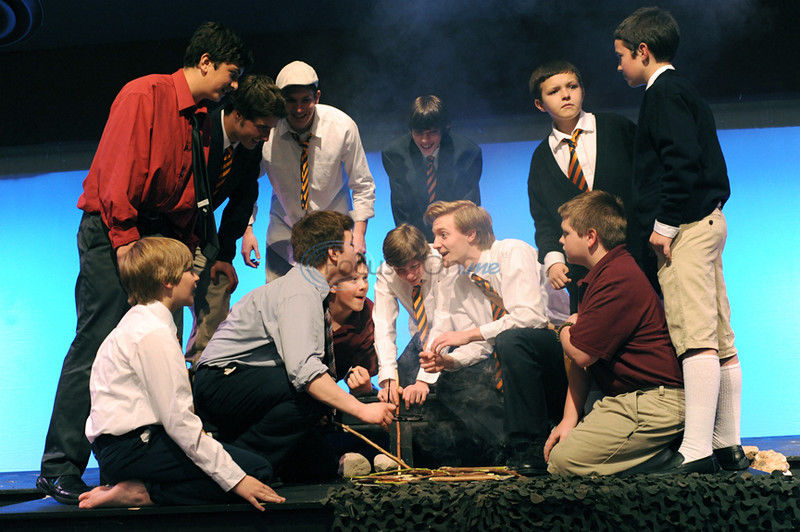 The boys attempt to create a campfire. (Victor Texcucano/Staff) 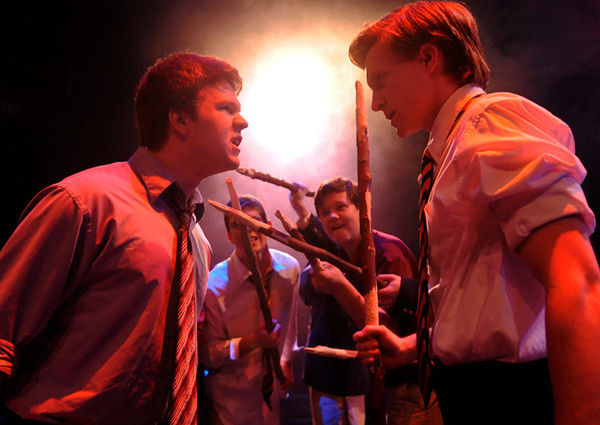 Ryan Castner and Mark Beckner rehearse a stand-off scene from Tyler Civic Theater's upcoming production of Lord of the Flies, a play based on the 1954 novel by William Golding about a group of British boys stuck on an uninhabited island attempting to govern themselves, with disastrous results. The play runs from Thursday to Sunday. (Victor Texcucano/Staff)

The boys attempt to create a campfire. (Victor Texcucano/Staff)

Ryan Castner and Mark Beckner rehearse a stand-off scene from Tyler Civic Theater's upcoming production of Lord of the Flies, a play based on the 1954 novel by William Golding about a group of British boys stuck on an uninhabited island attempting to govern themselves, with disastrous results. The play runs from Thursday to Sunday. (Victor Texcucano/Staff)

It's a literary classic and a staple of English classes everywhere, but that doesn't soften the fact that William Golding's "The Lord of the Flies" remains a dark, harsh and thematically challenging work. However, that didn't deter director Justin Purser from the project, it was what attracted him in the first place.

"I was surprised because your first reaction is that they're going to do a show that is all guys, it's 13-plus guys. That in and of itself is insane," Purser said. "I really think in general art should make you raise questions and think about things differently. And with ‘Lord of the Flies,' on the surface it's an adventure story and a story of survival, but there's also a lot of underlying themes, so that part I was really drawn to."

The story tells the tale of a group of young British schoolboys stranded on a deserted island. Left to their own devices the boys must find a way to survive and govern themselves, but things soon take a dark and deadly turn. It's difficult material that pulls no punches, but Purser said his young cast took to the material and invested themselves in it.

"We spent a couple rehearsals just going through the material and talking about the broader aspects of what we were trying to communicate underneath the obvious entertainment factor," he said. "But it's been a pleasure working with them and seeing them get to that point where, a couple of them, they just totally lose themselves in these characters and I tell them ‘That's when it works, that's when people see the contrast between the good guys and the ones that go into savagery.'"

As grim and violent as the story gets, Purser said it was important to remain true to the spirit of the text as toning it down too much would defang the story and lessen the impact of what was being said and examined.

"I wanted to stay as close and as real to what (William Golding) had written. This is definitely a different show for Tyler Civic (Theatre Center) than what they would normally do," he said. "I didn't want to have to tone down the brutality of it. It's like some people complain about certain religious films that have ‘bad stuff' in it, and it's like, you have to see the dark side to be able to appreciate the opposite."

But beyond the grimness and the shock of the violence, Purser said this is ultimately a very human story about characters trying to understand their nature as human beings and trying to cope with a loss of innocence.

"I think we as humans are capable of anything, whether it be extraordinary or atrocity. We're very unpredictable beings that give into desires, sometimes by choice and other times unwillingly," Purser said. "But there is something the ‘Lord of the Flies' says to Simon that I hold on to. ‘I am a part of you.' He's in all of them, some just let it show more than others."

"The Lord of the Flies" will continue its run through Sunday. Performances are 7:30 p.m. today and Saturday, with a 2:30 p.m. matinee Sunday. For more information or to reserve tickets call 903-592-0561 or visit www.tylercivictheatre.com