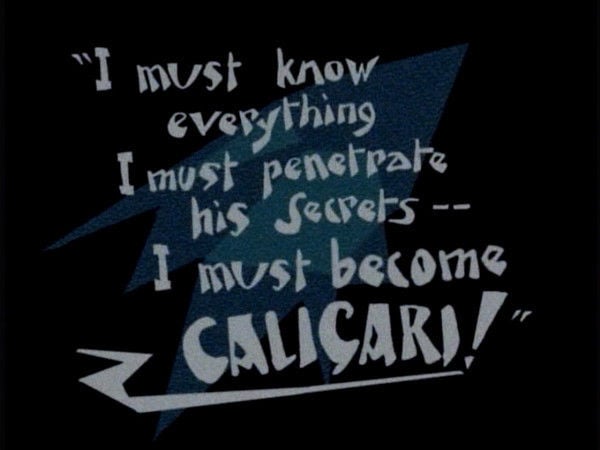 Screenshot from the film "The Cabinet of Dr. Caligari." Wikimedia Commons/Courtesy

Poster for the film "The Cabinet of Dr. Caligari." Wikimedia Commons/Courtesy

Screenshot from the film "The Cabinet of Dr. Caligari." Wikimedia Commons/Courtesy

Poster for the film "The Cabinet of Dr. Caligari." Wikimedia Commons/Courtesy

October is my favorite month when it comes to this column as it grants me the excuse to watch and write about a bunch of old horror movies.

I've always felt that horror has never really been my bag, but I realized recently that that's not entirely true. Modern horror isn't really my bag, but classic horror? Horror films like ones I'll be writing about here all month long? Those I love.

And it's films like "The Cabinet of Dr. Caligari" in particular that I especially love.

There's something about silent horror films, and especially those from the German Expressionism sub-genre, that feel eternally creepy and unsettling in a way that most modern horror films could only hope to. The lack of audible dialogue combined with the surrealism of the set design and the hazy look of aged film all combine to give these films the sensation of watching someone's waking nightmare.

This is especially true of "Dr. Caligari." Released in 1920 and directed by Robert Weine, this often considered to be one of the very first true horror films in the history of cinema. The story concerns Francis (Friederich Feher) as he recounts the tale of Dr. Caligari and his somnambulist (aka sleepwalker), Cesare (Conrad Veidt), who the doctor displays as a carnival side show exhibit. Cesare, it seems, is capable of making darkly accurate predictions, predictions that just so happen to coincide with a string of mysterious murders.

Even without the two twists that show up by the film's final stretch (both of which would be groan-inducing today, but I'm sure were absolute mind-blowing 93 years ago), this is still a remarkably effective little endeavor. The medium might have still very much been in its infancy, but it's remarkable how much vision and skill that Weine exhibits here.

As I said before, so much of what makes these silent Expressionist horror films so effective is the aesthetic they employ, and "Dr. Caligari" continues to look every bit as surreal as it did in 1920 thanks almost entirely to the set design and the standard practice of painting actors' faces white with black highlights around their eyes. The sets (with many painted backgrounds) are all hard and distorted angles, providing only the smallest semblance of order amid a landscape teetering on chaos. Combine that with the ethereal appearance of the actors, and you have a film that is nothing short of a distorted dream.

With a trim hour and 11 minute runtime, it's a brisk film and yet no less efficient at conveying its story and almost instantly creating a memorably creepy mood. And I can't really stress just how pervasive that mood is. It's an unsettling and creepy film more or less from frame one, one that manages to disturb more than provide any of the sort of tangible scares one might find in a contemporary horror flick.

What's truly remarkable, though, is that despite the fact Weine's film has been copied in one way or another countless times (Tim Burton has more or less made it his life's work to continuously lift motifs and aesthetics from this and German Expressionism at large), it still remains a very effective film.

"The Cabinet of Dr. Caligari" is available for streaming via Amazon Instant Video or Netflix Instant.

Next week, I'll continue looking at old, classic horror films with a review of "The Phantom Carriage," followed by original "The Creature from the Black Lagoon," "the original "The Mummy" and the original "Dracula."

Every week, Entertainment Editor Stewart Smith brings a new entry in "Catching Up On…" an ongoing series attempting to fill in the gaps of his cinematic education.