2022 Texas Rose Festival Queen Molly Louise Berry, left, waits in a hallway with her ladies-in-waiting before being introduced at the Winter Gala on Thursday at Willow Brook Country Club.

Attendants of the queen’s court line up and prepare to be introduced on Thursday night at the Tyler Rose Museum annual winter gala and benefit.

Molly Louise Berry is announced as the 89th annual Queen of the 2022 Texas Rose Festival at the Tyler Rose Museum benefit and winter gala on Thursday night.

Molly Louise Berry will carry on her family’s legacy as the 89th Queen of the 2022 Texas Rose Festival.

Berry comes from a long line of rose festival court members and said it is an honor for her to continue her family’s involvement in the rose festival.

“While over 50 members of my family have participated as members of the court, my grandparents Ann and Lee Lawrence were the start of my family’s involvement with the festival,” Berry said, noting how influential her grandmother was in her life.

She added she is looking forward to bringing tourism to Tyler and showing people what the city has to offer.

“What an honor it is for me to serve as the 2022 Rose Queen and not only represent the festival, but the beautiful city of Tyler as well,” Berry said on Thursday night as the community gathered for the 2022 Tyler Rose Museum Winter Gala benefit.

When she found out she would be the next rose queen, Berry said she was “absolutely shocked.”

“It was an amazing surprise,” she said. “I am excited beyond words.”

Young said the annual festival isn’t just about the “pretty dresses and pageantry” — it’s so much more.

“It’s about community, it’s about history, it’s about friendships, family traditions, and volunteerism, but maybe most importantly it’s about showcasing Tyler and the Rose Industry to the State of Texas, the country and even the world,” Young said.

Brewer noted the past efforts of growers and processors have made a profound impact on Tyler, as well as drawn national attention to the Texas Rose Festival.

“Being able to carry on my family’s legacy and represent the rose industry is something I will forever cherish,” Brewer said. 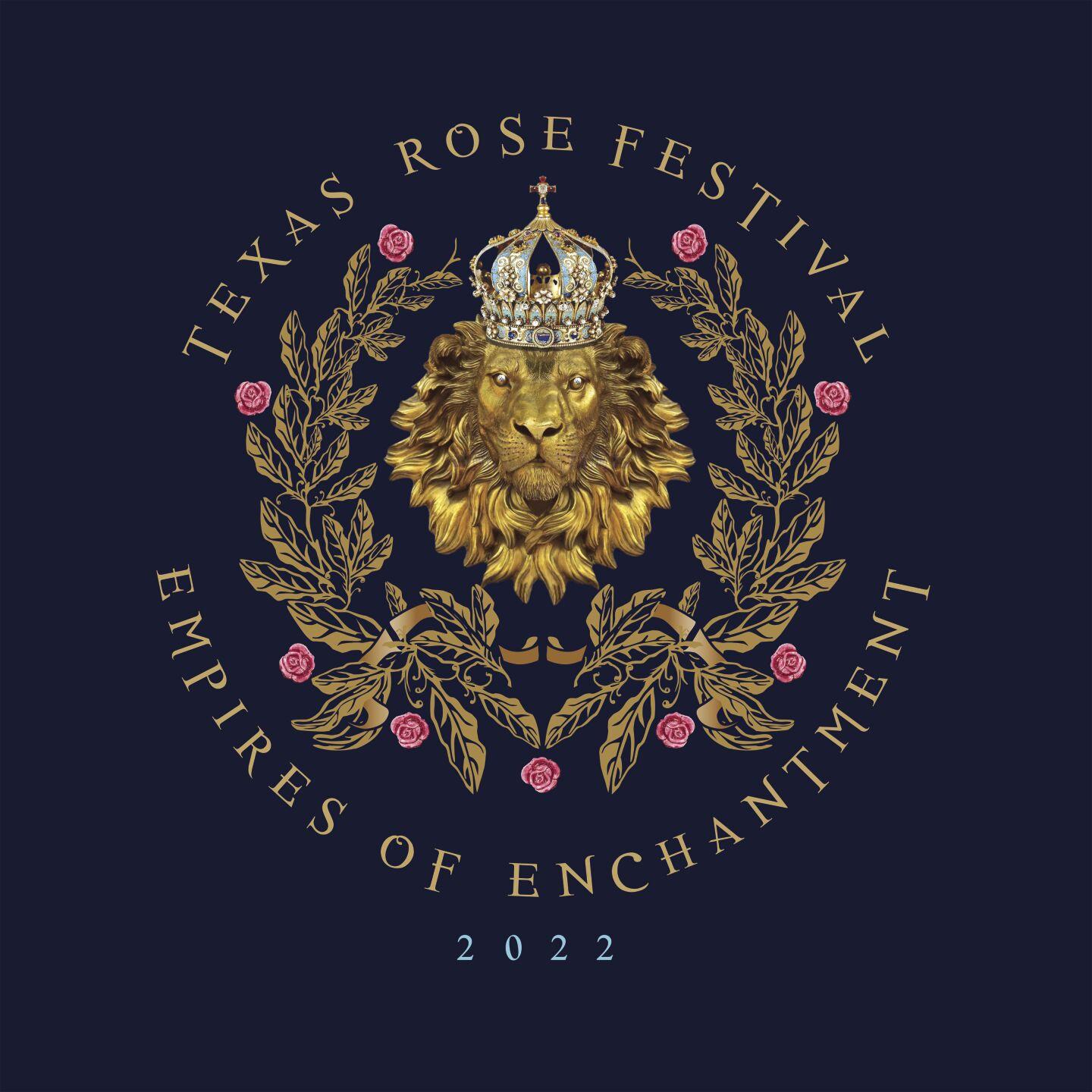 The festival’s theme was also announced as “Empires of Enchantment,” inspired by empires from around the world “that present the finest gifts,” similar to the magic felt during the annual rose festival season, according to Ron Schoenbrun, 2022 TRF vice president.

Each year a slew of events are held along with the special coronation, which is “what elicits the ‘oohs’ and ‘ahhs’” for tourists and residents alike, Schoenbrun said.

Texas Rose Festival Association President Tom Brown said the winter gala serves as a special occasion for people to support the Tyler Rose Museum, which preserves the history of Tyler and Smith County’s involvement in the rose industry.

Tyler is named the “Rose Capital of the World,” due to the large amount of roses processed in the area, Brown said. The Tyler Rose Garden is America’s largest municipal rose garden and is recognized in the National Register of Historic Places, he said.

Since 1933, the rose festival has been held to showcase both the community and the importance of the rose industry to Tyler.

Seven Tyler-area companies process and distribute several million roses each year and about 75% of all roses in the country are handled in Tyler.

“The Texas Rose Festival showcases our amazing community of which we all take considerable pride. I’m sure we’ve all have experiences of friends, families, clients coming to Tyler and being astounded at not just the rose garden but every aspect of our community,” Brown said, adding the rose showcases so well “a community of beauty and generous and kind people.”

Verna Hall was also honored as an honorary chair at this year’s gala for her outstanding volunteer services for the Tyler Rose Museum, Order of the Rose and the Texas Rose Festival as a whole.

When Hall found out she was being honored, she said, “I was shocked, surprised, I had no idea.”

Hall said she has been volunteering for more than 30 years with members of the Order of the Rose. Whatever needed to be done, she has always been ready to help, she said.

“Verna Hall, what can you say,” said Patrick Willis, a Tyler Rose Museum board member. “She’s a Tyler icon. Her volunteer service is legendary in our community.”

Also announced Thursday night, the ladies-in-waiting for the 2022 Rose Festival include:

Attendants of the queen include:

Bullard High School students make their way to class for the first day of school for the Fall 2020 semester.

As students make their way back to campuses after the winter break, COVID-19 has been rapidly transmitting throughout East Texas.

Area school district officials said they are prepared to adapt their protocols as needed and continue to keep the safety of their students and staff at the forefront.

Tyler ISD recently updated parts of its “Return to School” plan, including the screening and isolation protocols.

Although the district doesn’t require masks, Tyler ISD “highly recommends students and staff consider wearing a face cover during rising and/or peak infectious seasons as a way to prevent the spread of disease when other mitigations (such as vaccines) are not utilized, especially when indoors, in tight spaces, and/or as part of heterogeneous groups outside of normal cohorts,” district documentation reads.

The Return to School plan consists of regulations such as staff requiring self-screening prior to entering a Tyler ISD building, daily screening of students before sending them to school, and not allowing students, staff or visitors to enter a district facility if they experience COVID-19 symptoms or are waiting for results from a COVID test.

Tyler ISD also mentions an individual diagnosed with COVID-19 may return to school when all three of the Centers for Disease Control and Prevention symptom-based criteria are met, which are five days since the start of symptoms or diagnosis, 24 hours fever-free without the use of fever-reducing medications and improved symptoms among the individual.

If a staff member or student has symptoms that could be due to the virus, and would like to return to school before the five-day quarantine period, established recently by the CDC, they must obtain a medical professional’s note allowing them to return on an alternative diagnosis or if the individual obtains a negative COVID-19 result (no home tests accepted), the updated protocols state.

Since Tyler ISD students returned to campus on Jan. 3, the district’s COVID-19 tracker online shows 21 positive cases among students and staff. The district’s website states “some cases may be posted twice since there are situations where students or staff may be on more than one campus.”

Lindale ISD, which returned on Monday, has also established updated protocols for campuses.

Surratt informed parents the number of cases is currently in a “good” spot, but the district will continue to keep the parents informed.

“Our COVID numbers are really good, we have five staff members across the district that have tested positive and have a few students across the district,” Surratt said on Wednesday. “Those who are here on campus and when they test positive, we will continue to keep parents and family members informed.”

For students in Chapel Hill ISD, the district is reviewing recommendations from local health officials about back-to-school COVID-19 precautions. Students returned on Jan. 5. The COVID-19 tracker on the district’s website had not been updated since Dec. 9, as of Thursday afternoon.

Bullard ISD will be on break until Jan. 11, but according to the district, current protocols listed online will continue to be enforced when students come back.

The district will continue to follow its Return to School plan and recommends mask usage, although not required. Some of the campus protocols include: self-screening for staff, students and families; sanitizing school buses; disinfecting high-traffic areas daily and throughout each day, quarantine rules for those who are positive or symptomatic and more.

Before the holiday break, there were only two positive cases across Bullard ISD, according to an online tracker last updated on Dec. 27.

New cases of COVID-19 in Smith County on Thursday more than doubled the amount of new cases reported on Monday, according to the latest data from the Northeast Texas Public Health District.

So far this week, more than 1,800 new cases of COVID have been reported in the county — more than all the cases reported over nearly a month span in December.

NET Health defines probable cases as those which are attributed to patients who have received positive antigen tests, until the individual has been administered a Polymerase Chain Reaction (PCR) test. If a person’s PCR laboratory result is positive, that becomes a confirmed case.

Smith County’s community transmission rate has nearly tripled since a week ago, now at a “substantial” rate of 115.20 compared to 38.66 last Thursday.

A substantial rate means cities across Smith County are experiencing large-scale, uncontrolled community transmission of the virus in places such as grocery stores, schools, churches, workplaces, nursing homes, daycares and other congregate settings.

As of Thursday, all seven counties in NET Health’s jurisdiction have now reached “substantial” transmission levels, but Smith County leads the way with the highest rate in the region.

According to NET Health, the rate calculates the average number of all COVID-positive cases from the previous seven days. That answer is then divided by the population of the county, multiplied by 100,000, and that final number equals the rate.

According to NET Health, there were 147 East Texans being treated for COVID-19 at Tyler hospitals on Thursday. The county’s hospitalization rates now trend similar to data last seen in early November.

On Thursday, there were 213 COVID-19 patients hospitalized in the state’s 19-county Trauma Region G. Of COVID patients hospitalized, 43 of those are in ICUs and 13 patients are on ventilators. In the first half of September, hospitalizations reached 822, the highest number of single-day COVID-19 hospitalizations in the region since the pandemic began. Similar trends were last seen late October.As of Thursday in Smith County, 54.05% of people age 5 and older had received at least one dose of the COVID-19 vaccine, while 47.53% of people age 5 and older had been fully vaccinated, according to the state. State data shows 85.30% of people 65 and older in the county had been vaccinated with at least one dose on Thursday, while 78.79% of that population had been fully vaccinated. As of Nov. 4, children 5 to 11 years of age are included in vaccination numbers and rates.

Currently, 18 Smith County jail inmates have an active diagnosis of COVID-19 and one inmate has died due to COVID-19 since Monday’s report, according to NET Health.

There have been 40,482 total COVID-19 cases in Smith County since the pandemic began and 37,195 total recoveries, according to NET Health.

Henderson County had 208 new cases — 122 confirmed, 86 probable — reported since Monday. There are 511 total active cases within the county.

Van Zandt County had 132 new cases — 62 confirmed, 70 probable — reported since Monday. There are 376 total active cases within the county.

Anderson County had 149 new cases — 29 confirmed, 120 probable — reported since Monday. There are 365 total active cases within the county.

Wood County had 93 new cases — 41 confirmed, 52 probable — reported since Monday. There are 262 total active cases within the county.

Rains County had 20 new cases — four confirmed, 16 probable — reported since Monday and there are 48 total active cases within the county.

“Therefore, with minds that are alert and fully sober, set your hope on the grace to be brought to you when Jesus Christ is revealed at his coming.” (1 Peter 1:13)

Click and hold your mouse button on the page to select the area you wish to save or print. You can click and drag the clipping box to move it or click and drag in the bottom right corner to resize it. When you're happy with your selection, click the checkmark icon next to the clipping area to continue.