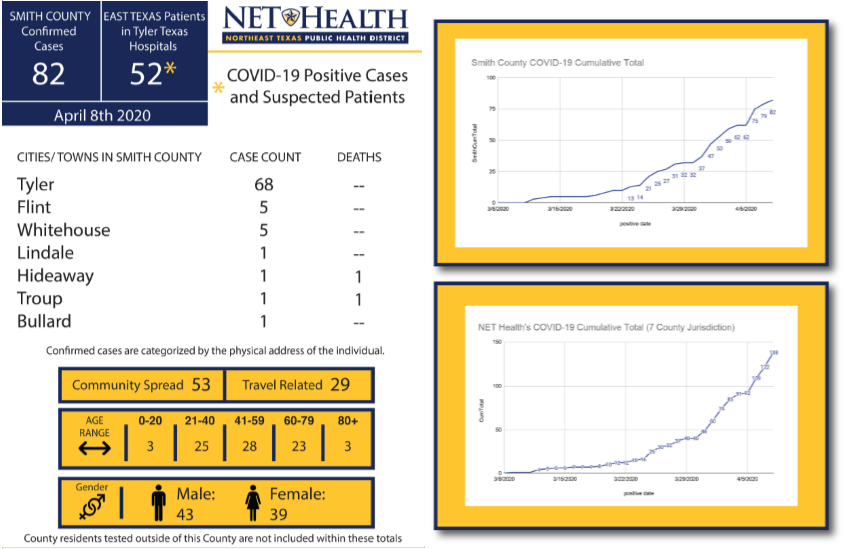 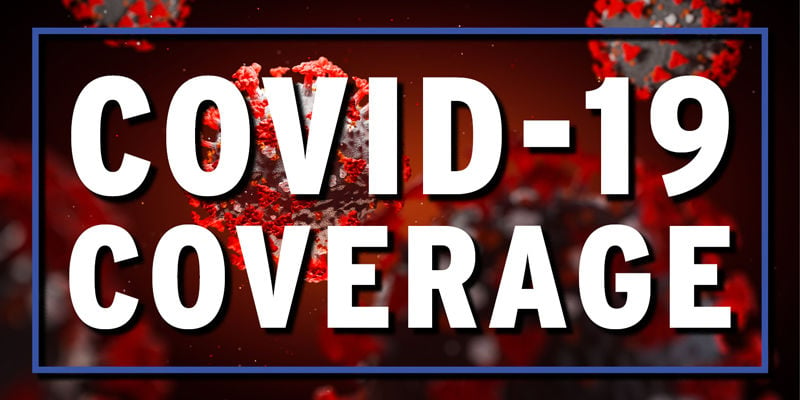 Smith County now has 82 confirmed cases of the coronavirus as of Wednesday afternoon, up three from Tuesday.

At a joint news conference today, the city of Tyler, Smith County and Northeast Texas Public Health District officials are expected to announce the number of patients who have recovered from the coronavirus.

City of Tyler spokesperson Jenny Wells said they hope to make an announcement on recoveries within Smith County. The method of determining a patient’s recovery will also be addressed during the conference.

The news conference will be broadcast live on the Tyler Paper Facebook page at 2 p.m.

The state’s COVID-19 tracker showed Wednesday that 9,353 people in Texas have tested positive for COVID-19 and the state expects to have tested 100,000 in total within the next day. That’s up more than 1,000 since Tuesday. Gov. Greg Abbott said 1,491 people are currently hospitalized due to confirmed positive cases of the virus and there have been 175 fatalities in the state. Some of that data may be lagging as it is reported to the state through individual county and public health departments.

Abbott said Tuesday was the high water mark in the state of Texas for both the number of people who tested positive and fatalities, and the state will continue seeing those numbers increase.

He urged Texans to stay home, crediting existing social distancing efforts with keeping numbers lower than they otherwise would be.

Abbott said there are 21,066 beds available in the state at this time. He said Texas 2,025 available ICU beds and more than 7,000 ventilators.

There are 68 confirmed positive cases of COVID-19 in Tyler, five each in Flint and Whitehouse and one each in Lindale, Hideaway and Troup. Bullard now has its first case.

There have been two deaths from the virus in Smith County, a 91-year-old Hideaway Lake man and a 56-year-old man from Troup.

NET Health has no recoveries listed in its seven-county surveillance area. Public Information Officer Terrence Ates told the Tyler Morning Telegraph that CDC guidelines do not require a patient to obtain multiple negative tests to be considered recovered. He said their physician is the ultimate decision maker of whether a patient is considered officially recovered from COVID-19.

As of Tuesday, NET Health also reported the following number of cases in its surveillance area:

Guidance for Dental Settings During the COVID Response

During this COCA call, presenters will provide an overview of the updated guidance for dental settings, including recommendations for resuming non-emergency dental care during the COVID-19 pandemic. Presenters also will discuss strategies for dental healthcare facilities to optimize personal…