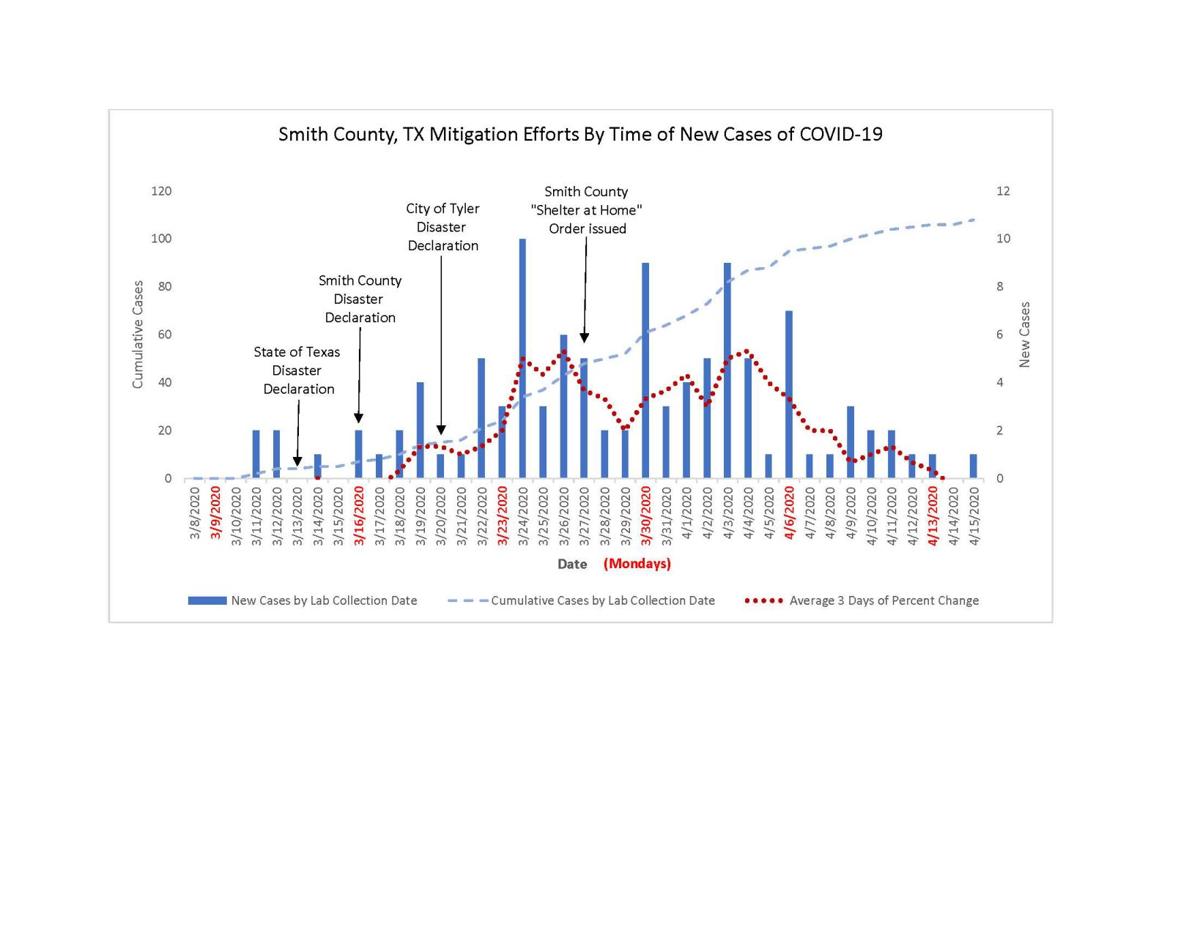 A graphic created by NET Health shows different data sets the organization is using to determine the “curve” for Smith County. NET Health said data indicates the curve is beginning to reach the point where it will flatten. 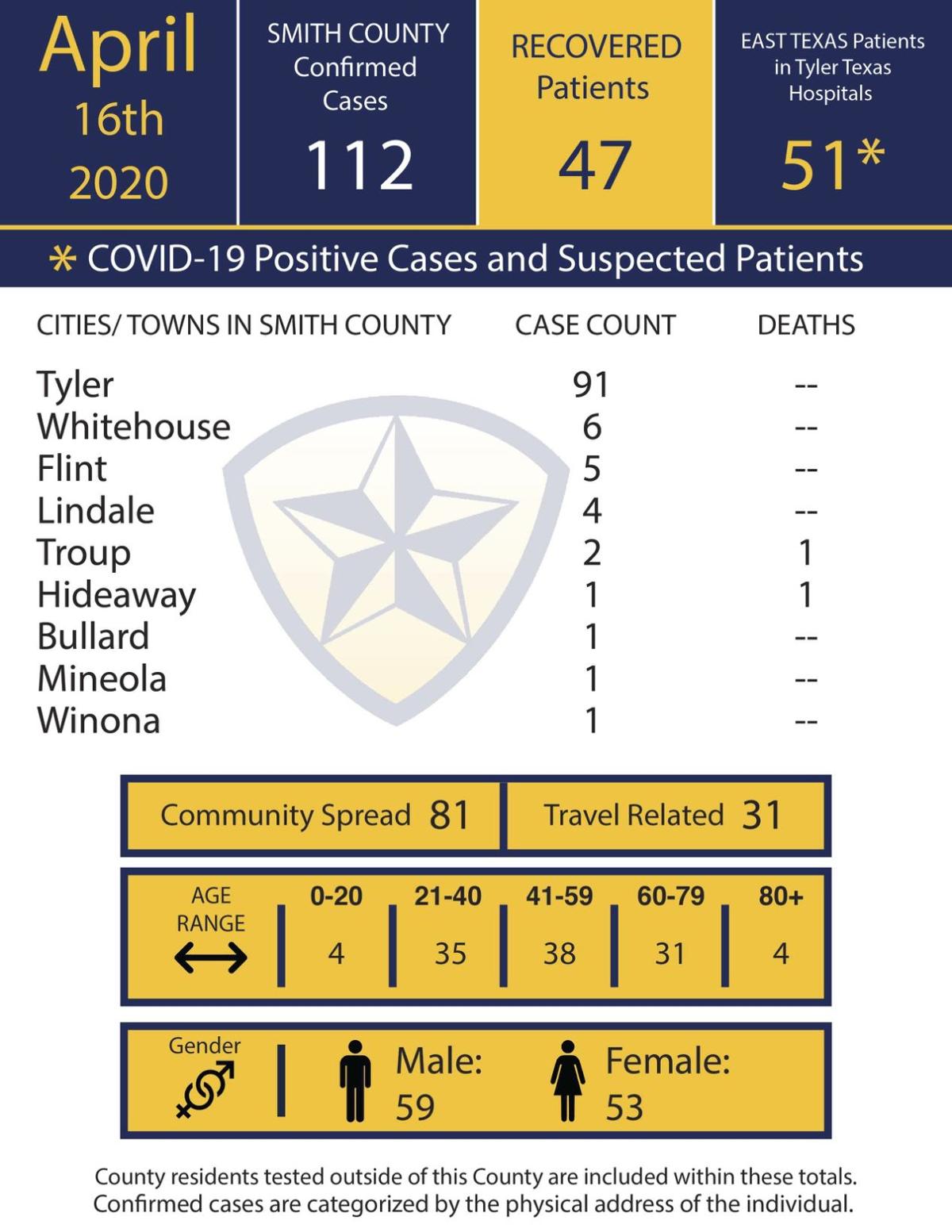 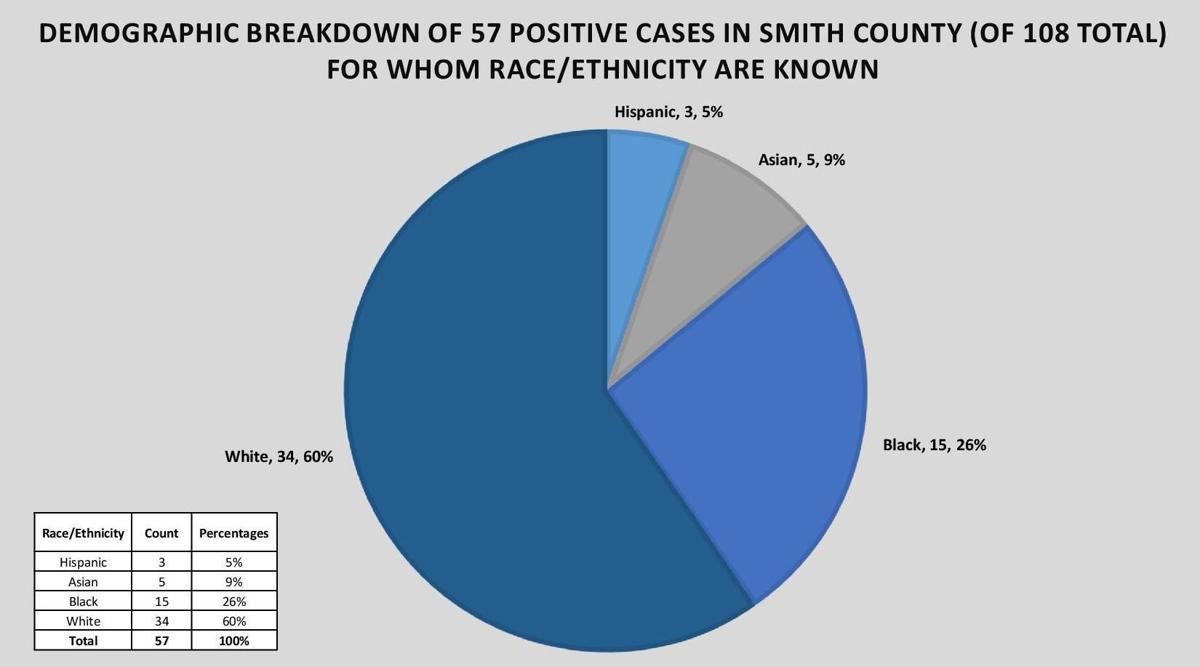 A graphic created by NET Health shows different data sets the organization is using to determine the “curve” for Smith County. NET Health said data indicates the curve is beginning to reach the point where it will flatten.

Smith County has 112 confirmed coronavirus cases and 47 recoveries as of Thursday afternoon, according to the Northeast Texas Public Health District.

This total is up by four since Wednesday.

In all, there are 63 active cases, 47 recovered cases and two deaths in Smith County.

According to the joint information center, the recovery numbers will be updated on Tuesdays and Fridays. The center is made up of agencies like the city of Tyler, Smith County, NET Health and Tyler ISD.

NET Health CEO George Roberts made the announcement of the case numbers on Thursday during a news conference at the Smith County Commissioners Courtroom. He and Smith County Health Authority Dr. Jeffrey Levin also shared that based on early data the curve on local coronavirus cases seems to be flattening.

NET Health’s requirements for recovery are that it’s been 14 days since the symptoms began, the patient has no fever for eight days without having to use medicine and improvement of respiratory symptoms, NET Health CEO George Roberts said.

Of the 112 Smith County cases, 91 are in Tyler, six in Whitehouse, five in Flint, four in Lindale, two in Troup, one each in Hideaway, Bullard, Winona and rural Smith County near Mineola.

Eighty-one cases are community spread and 31 are travel-related.

NET Health also shared race and ethnicity numbers for 57 out of the 112 Smith County cases due to some information not being provided for patients tested at private labs. Of the 57 cases where race is known, 34 are white, 15 are Black, five are Asian and three are Hispanic.

NET Health is also reporting there are 51 East Texas patients being treated for COVID-19 at Tyler hospitals. These patients may not all be Smith County residents. A 91-year-old Hideaway man and a 56-year-old Troup man have died from COVID-19.

The Rusk County Office of Emergency Management reported a patient in the Henderson area died from the coronavirus. Rusk County OEM also announced two new cases, which brought its total to 27.

Gregg County has 49 cases as of Thursday, according to the Gregg County Health Department.

In Upshur County, there are nine cases as of Thursday, according to the Longview News-Journal.