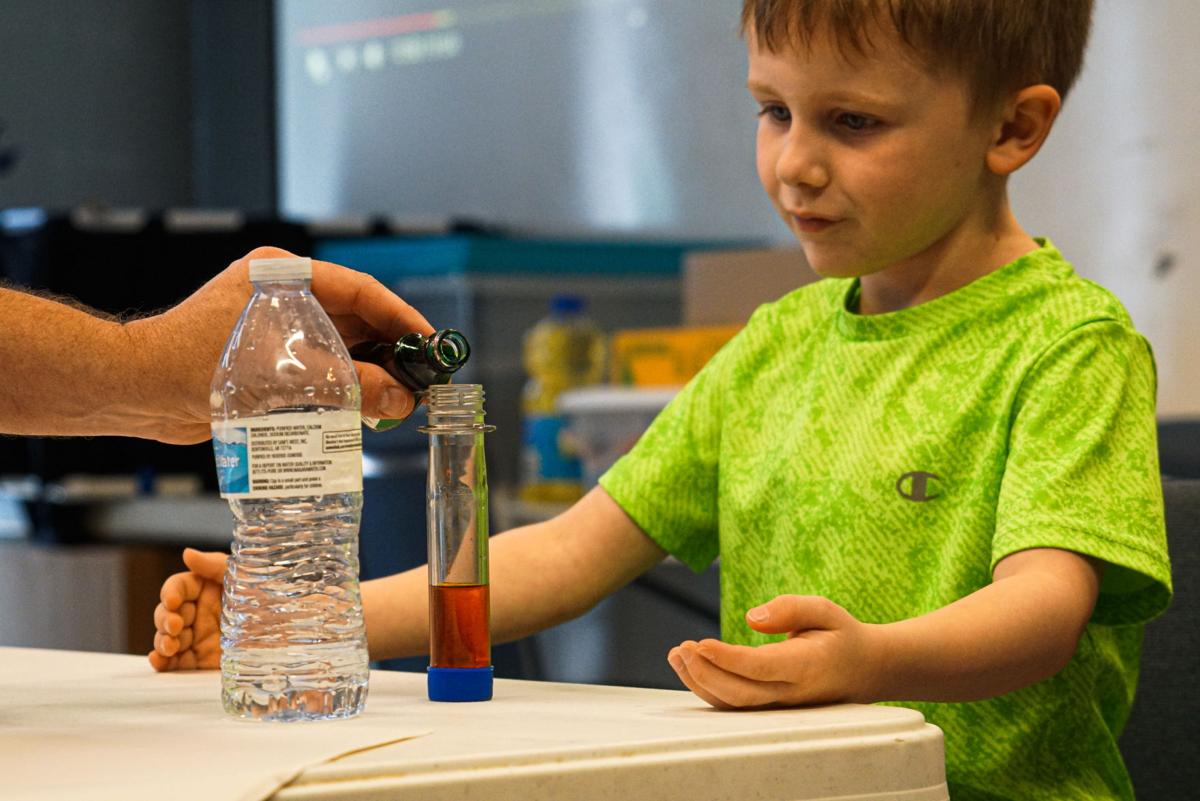 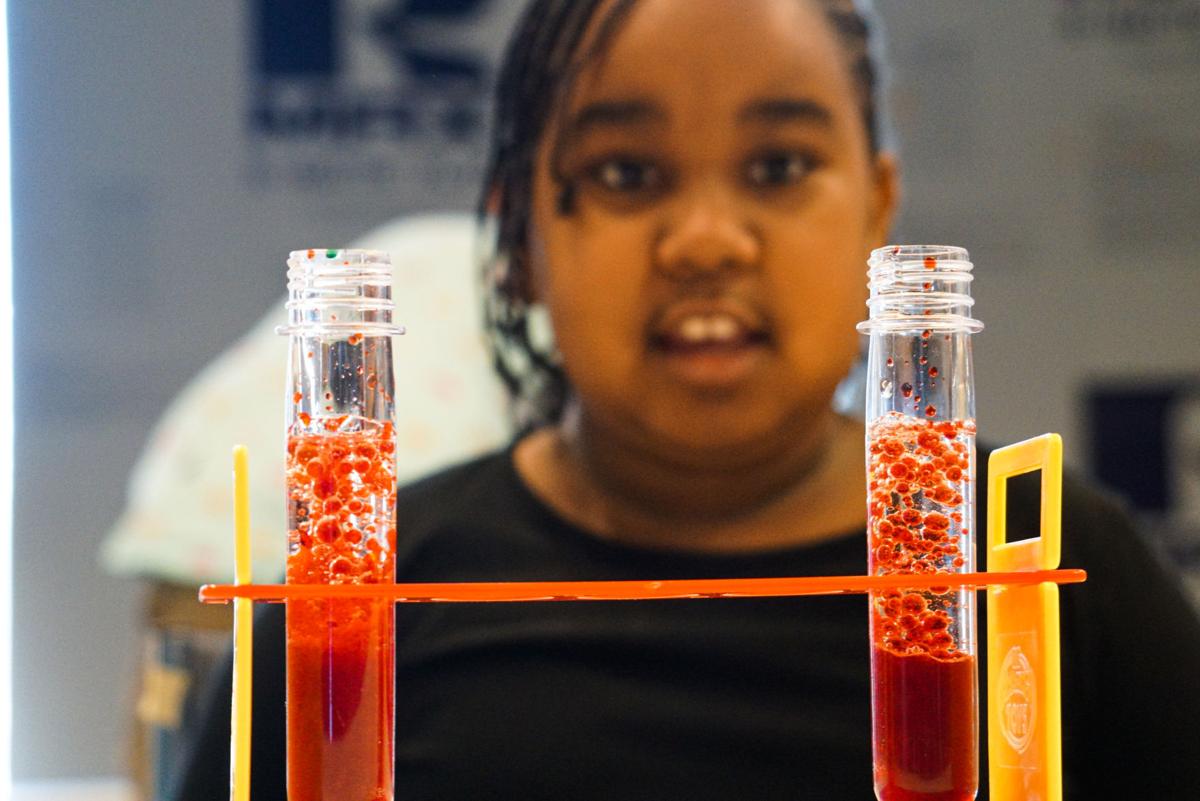 Anorah Johnson, 10, watches in astonishment as her lava lamp begins to bubble in her test tube at Discovery Science Place’s Chemical Engineering camp. 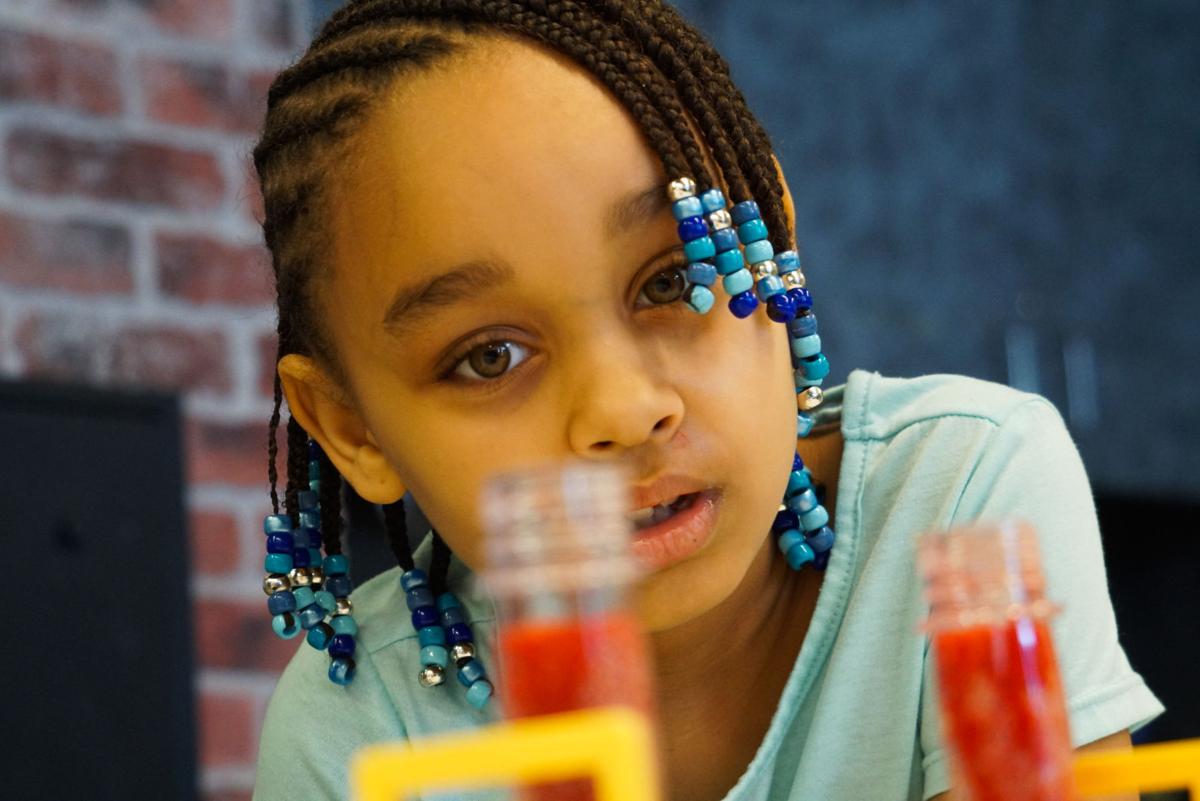 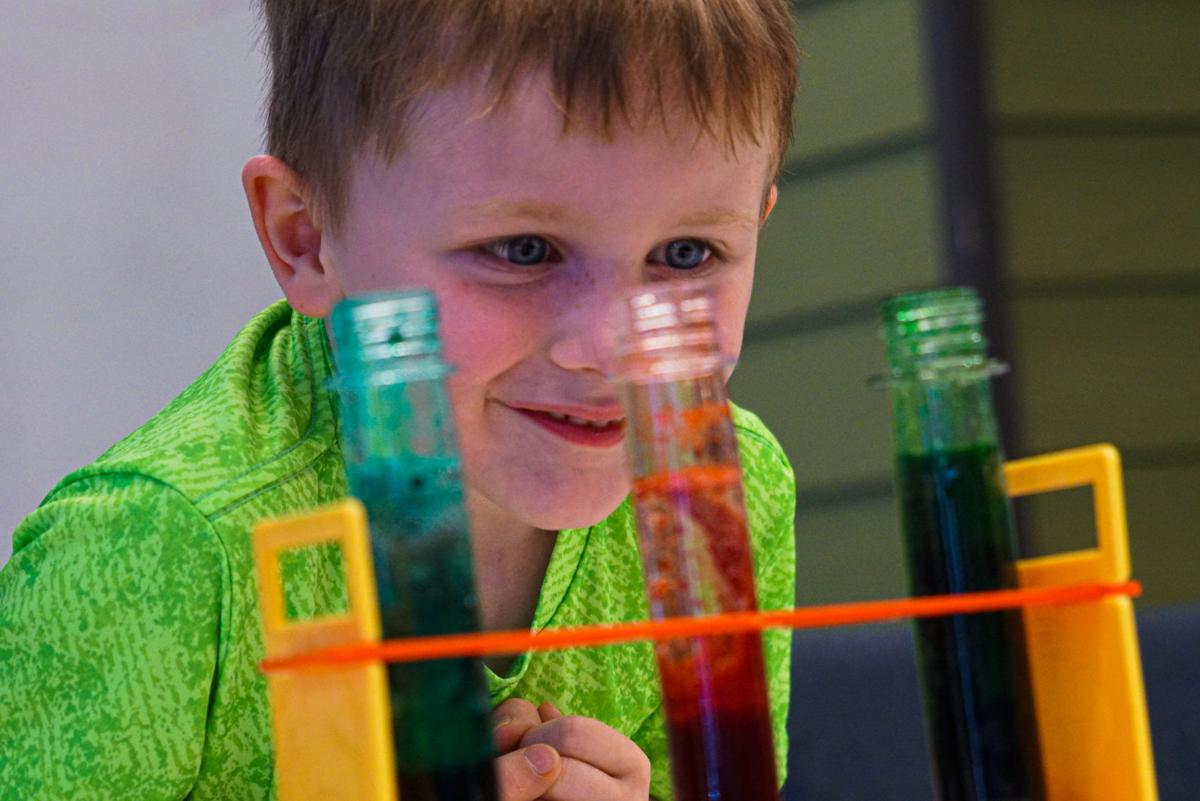 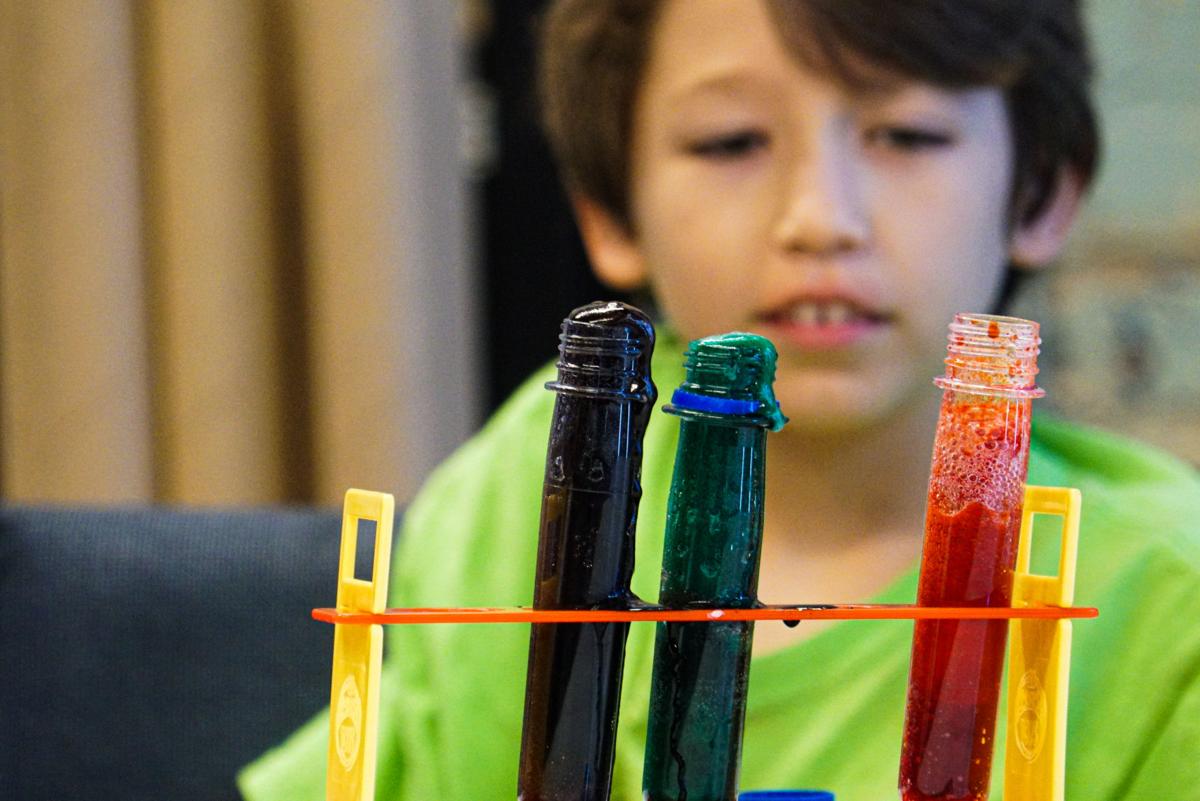 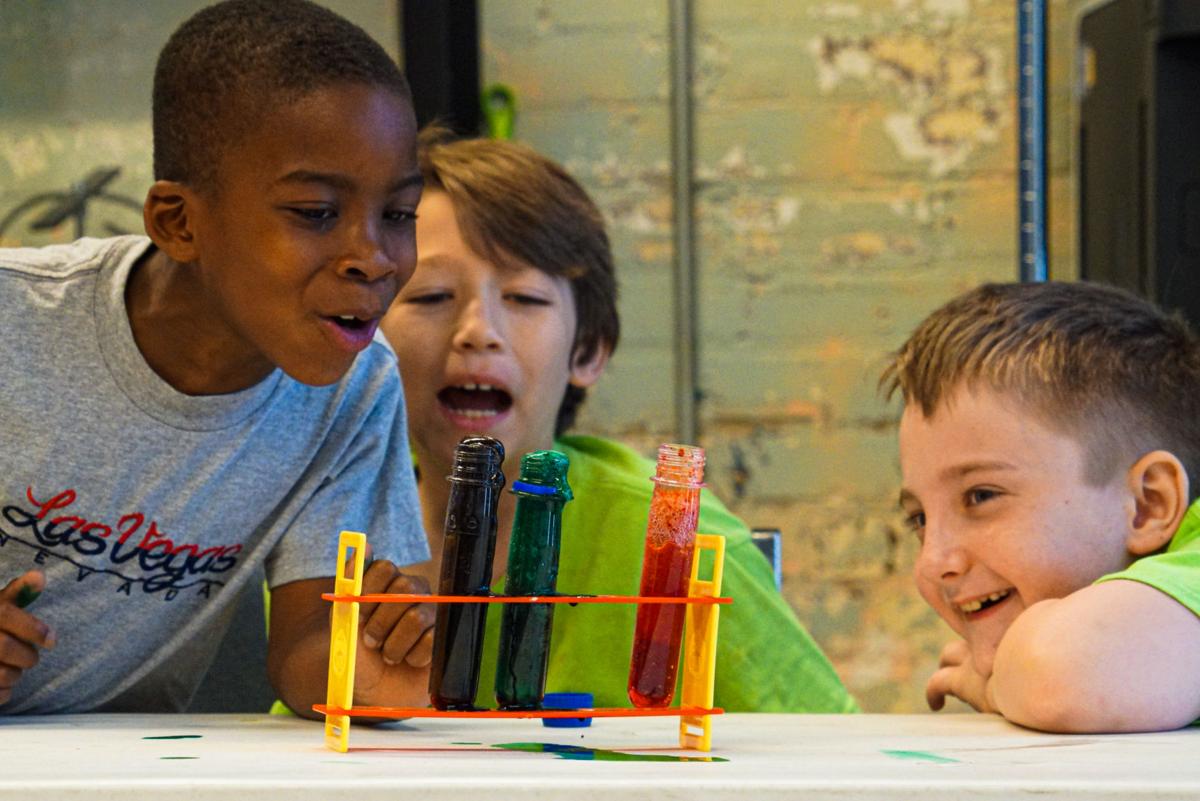 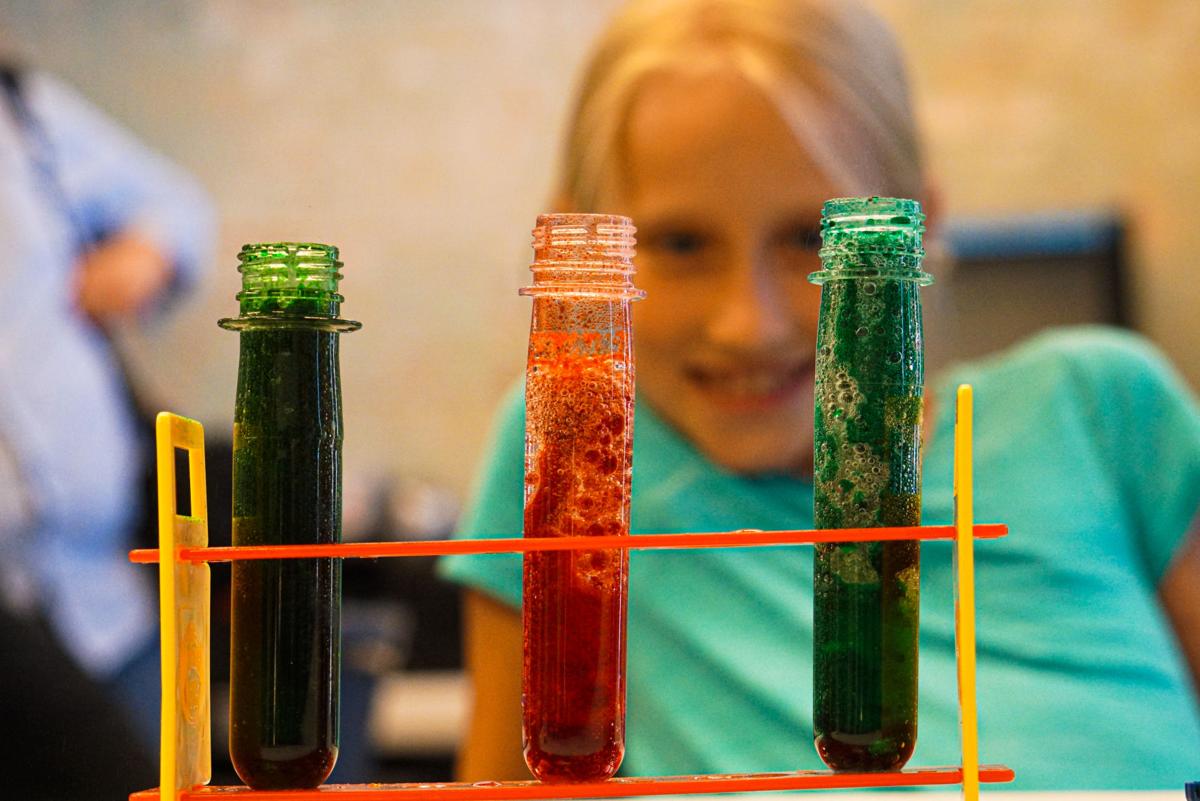 Sonja Hines, 9, watches her test tube with a smile on her face as it bubbles over at Discovery Science Place's Chemical Engineering camp.

Anorah Johnson, 10, watches in astonishment as her lava lamp begins to bubble in her test tube at Discovery Science Place’s Chemical Engineering camp.

Sonja Hines, 9, watches her test tube with a smile on her face as it bubbles over at Discovery Science Place's Chemical Engineering camp.

Six-year-old Brenden Ethridge was so excited he could barely contain himself.

“Oh gosh,” he shouted after learning he and other campers at Thursday’s session of Discovery Science Place’s chemical engineering camp were about to make lava lamps in oversized test tubes.

As camp director Tim Kennedy went around to each of the 10 elementary-school campers and put a little water in the tubes, Brenden had a question: “What’s a lava lamp anyway?”

Kennedy then put in a few drops of food coloring in the tubes.

“Now I want you to shake it up a little bit,” Kennedy told the children, who seemed to be getting more excited by the second.

Seated at tables in the auxiliary building of the museum at 308 N. Broadway Ave. the kids shook their tubes with all their might.

“We are going to add some vegetable oil,” Kennedy said. “Don’t shake it up.”

“But I want to shake it up so badly!” called out one of the children.

“The last thing we are going to do is add some Alka-Seltzer,” Kennedy said. “This is where it’s going to get fun.”

When Kennedy dropped small pieces of Alka-Seltzer tablets into each tube, bubbles instantly formed and rose to the top. Colorful globs began moving around in tube.

Others squealed in delight.

“What you witnessed is a chemical reaction,” explained Kennedy after the children settled down. “That occurs when two different chemicals come together and form something else.”

The Alka-Seltzer had reacted with the water to produce carbon dioxide gas bubbles that attached to the blobs of colored water and caused them to float to the surface. When the bubbles popped, the blobs sank to the bottom of the tube.

“Once there are no more bubbles, you can put the top back on,” Kennedy said.

The lava lamp experiment is one of many that will take place this week at the day camp for children. The idea is to present children basic lessons in chemistry in a fun way that gets them excited.

Science camps will continue through July. Other camps will feature cool activities focusing on space, robotics and 3D printing.

After being closed for weeks because of COVID-19 concerns, the museum recently reopened. People can make reservations to attend during a designated block of time on Friday through Sunday.

Information about the museum and its science camps is available at discoveryscienceplace.org.