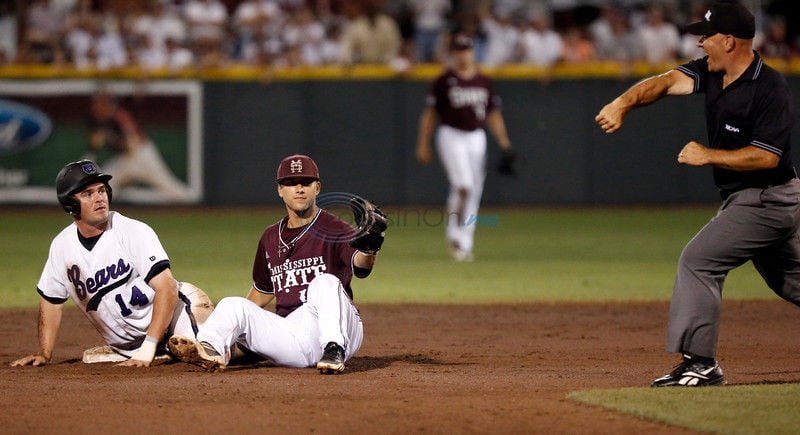 Mississippi State's Brett Pirtle, center, holds up his glove with the ball as the umpire gestures that Central Arkansas' Garrett Brown (14) is out at second base in their NCAA college baseball regional tournament game in Starkville, Miss., Sunday June 2, 2013. The two teams play Monday to determine the regional champion. (AP Photo/Rogelio V. Solis) 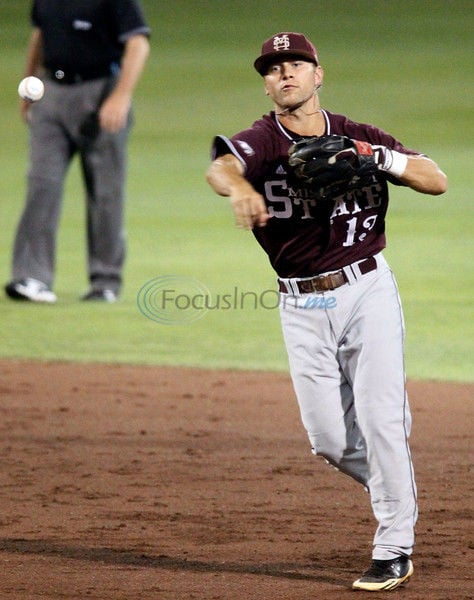 Mississippi State's Brett Pirtle, center, holds up his glove with the ball as the umpire gestures that Central Arkansas' Garrett Brown (14) is out at second base in their NCAA college baseball regional tournament game in Starkville, Miss., Sunday June 2, 2013. The two teams play Monday to determine the regional champion. (AP Photo/Rogelio V. Solis)

Every athlete has a low point; a time in his or her career where things are just not happening.

For Tyler’s Brett Pirtle, the first weekend of June 2012 could qualify.

Pirtle received an early morning phone call informing him he had been released from the East Texas Pump Jacks of the Texas Collegiate League.

This news came on the heels of Pirtle posting a career-worst average as a sophomore for Panola College.

On Saturday, nearly a year to the day that he took that call, Pirtle will take the field for Mississippi State in the opening game of the 2013 College World Series in Omaha, Neb.

“It’s crazy. It’s something you always dream about when you are little and it really hasn’t hit me yet,” said Pirtle, starting second baseman for the Bulldogs. “I guess when we get there and see how crazy it’s going to be. It just feels a little surreal right now.”

The Bulldogs reached this point by upsetting Virginia earlier this week in a two-game sweep of their rain delay-filled super regional.

Pirtle drove in two runs in Game 1 and the Bulldogs second baseman delivered two highlight-reel defensive plays that ended up on SportsCenter — one of which was so stellar, it became a Top 10 play.

The Bulldogs are making their ninth trip to Omaha and first since 2007.

A year ago at this time, Pirtle was not sure what the future held. An All-American his senior season at Robert E. Lee, Pirtle continued that success into college with Panola, playing nearly every game his freshman season and finishing with .325 with 63 hits in 55 games.

Around this time, Pirtle signed a scholarship letter of intent to Mississippi College. He had one more year left with Panola, but 2012 did not go as planned.

Pirtle batted .222, and with Mississippi State on the horizon, hoped to get things turned around with the Pump Jacks.

But as the saying goes, when one door closes another opens. This door happened to be in a small town in Kentucky.

The Hopkinsville Hoppers were in the midst of their inaugural season in the Ohio Valley Summer Collegiate Baseball League (OVL). The Hoppers had gone 1-1 in their first two games, and had an opening in their infield.

On June 5, Pirtle made his debut for the Hopper as their shortstop and leadoff hitter. He went 3 for 4 with an RBI and a run scored in a 7-1 win. Pirtle went on to bat .330 with 26 runs scored and 23 RBIs to go along with 14 stolen bases.

“I ended up getting in a sophomore slump; and I was at a real low point,” Pirtle said. “But (I was able to come back from that).”

Now he packed his bags for Starkville, Miss., with high hopes that he could keep it rolling in the SEC.

“I didn’t have a job; it was open for anyone,” Pirtle said of his early weeks with Mississippi State. “I felt like I was (at a disadvantage) because I’d had a bad sophomore year, but I liked (that I had to earn the job) rather than having it given to me.”

Pirtle impressed Mississippi State head coach John Cohen enough with his all-around glove skills and bat to be the Bulldogs second baseman. Then Pirtle went about showing why Mississippi State had recruited him in the first place, finishing his first season with .306 average with 36 runs scored and 33 RBIs and to receive All-SEC second team honors.

The Bulldogs finished in third place in the SEC West, but got on a roll in the SEC Tournament to reach the semifinals. Mississippi State’s 48-18 overall record was good enough to get the Bulldogs into the NCAA Tournament, hosting a regional.

Mississippi State advanced, but still had to get past Virginia if it was to reach Omaha.

“We knew when (we arrived) in Virginia that we had a chance to do something special,” Pirtle said. “We didn’t have the best record in the SEC, but it’s the SEC and you have to take that into account. Playing in that (tough of a conference), we faced great arms and it prepared us.”

The Bulldogs now will take on a team from the Pac-12, but Pirtle believes the time is now for Mississippi State.

“We’ve always been together; this is the best chemistry on a team that I’ve ever been a part of,” Pirtle said. “We have a lot fun out there. We just work and we know we have a chance to achieve something special.”

By The Associated Press